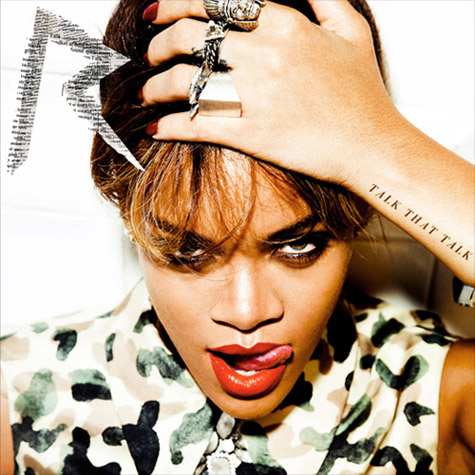 Barbadian pop princess Rihanna‘s latest album, Talk That Talk, is her sixth since her 2005 debut, Music of the Sun. It also happens to be her second album in the span of a year, following last November’s highly-lauded Loud. Rare is the artist who can return from a hit so quickly, yet Rihanna has done so rather fluidly. So, then, what does Talk That Talk do as a release to further her reign? How does it continue Rihanna’s journey toward total pop mastery hot off the heels of powerhouse Loud? If anything, it’s an album that merely perpetuates, without enhancing, the Rihanna narrative, rendering ear-catchingly awesome cuts and flop-tastic sonic duds alike.

As efficient and overall beneficial to her career as the approach may be, releasing two albums in such proximity could have negative effects on the Rihanna train. Because, beyond a shadow of a doubt, Loud is the superior monster, all thanks to its massive string of hits, including “S&M” and “What’s My Name?” What we get from Talk That Talk, though, are examples of creative stagnation in cuts like the title track and “Farewell”. The former features Jay-Z, who previously guested on a version of Rihanna’s super-hit “Umbrella”. This time around, the two titans create a track built on tired, half-hearted flows from HOV (including the eye-roll-inducing “Shawty must’ve heard, got the word, I move that D/Had it by a bladder, she like ‘Oh, I gotta pee’”) and a vocal performance from Rihanna with as much emotion and interest as her stuff with SNL. The most offensive offering, though, is album closer “Farewell”. The boisterous cut exemplifies every single complaint about Rihanna’s sound: vacuous, over-produced despite an under-developed concept, and as phony as the hair dye on her head.

While Loud may have been more of a pleasurable experience, it did rely more overtly on big-name producers/songwriters/etc. As a noticeable improvement, there are cuts on Talk That Talk that sound less muddled with the work of others (despite the opposite being true). “We Found Love”, even with the dubstep influences of Scottish DJ/producer Calvin Harris, sounds like the kind of pop track Rihanna should be making, with lots of dance energy, a swelling, anthem-like declaration, and vocals that feel flawed and yet evocative and rich in authenticity. Where Jigga overpowered Rihanna, Harris’ influence feels more collaborative. A similar case can be made for “We All Want Love”. The build is slow and Rihanna’s vocals are as spot-on as they should be. It’s not the giant-sized pop gem she needed, but it’s simple and effective enough, with some much-needed scaling back by producer No I.D. If there are any complaints from these two songs, it’s that they’re middle of the road, neither overpowering and alluring or painful and derivative. Their existence on the album is to distract from the bad and take away from the good.

And speaking of good, no Rihanna record would be complete without some kind of hits included. The problem is, though, that this album is lacking fiercely in the big-time, gargantuan smashes Rihanna has made her career on. Even still, there are a few sonic creations on Talk That Talk that give the listener something to celebrate. Riding on the back of the aforementioned “S&M”, “Cockiness” could be one of Rihanna’s best sex-infused odes to date. The sound is the diluted reggae Rihanna rose to fame with, but now drenched in a Major Lazer-esque glow. What really captures the ear, though, is the repetition of “Suck my cockiness/Lick my persuasion/Eat my poison/And swallow your pride down, down.” It’s the kind of delivery that is simultaneously a nudge and wink and still seeping with the warmth of this unshakable sex appeal. It’s cheesy and kitschy, but anyone is powerless against its advances. Doing away with almost all of that last track’s fun vibe, “Watch N Learn” is a fusion of Rihanna’s catalog over the last half-plus decade: She’s proud and sexual, but her confidence comes from elsewhere. The seductive swing of the modified reggae jam is as close to her roots as she’ll ever get, but there’s real tangible musical growth. It also proves that low-key Rihanna, without heaps of easily identifiable help or loads of over-saturated gimmicks, is still a knockout.

After a massive run in such a short time, the question now is where Rihanna goes from here. To delay an album any more than a year would ruin her buzz. However, to shell something out so ravenously could result in another effort that lacks any consistency and/or innovation. With those things in mind, the next inclusion in her catalog should be fairly integral for her career. Until then, we’ll just have to wait and hear what she has to say next.