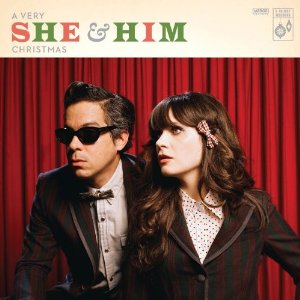 Keeping in the line with their first two albums of utterly non-offensive twee-pop, M. Ward and Zooey Deschanel have turned in an album of utterly non-offensive Christmas music. There is really no way to feel particularly positive or negative towards She & Him’s take on the standards of A Very She and Him Christmas. It is a perfectly acceptable, listenable effort, at times enjoyable, at times not, by a band that is the ideal choice to record cutesy, “indie” versions of holiday classics like “Silver Bells” and “I’ll Be Home for Christmas.”

Gone are the more complex arrangements and lush production of Volume One and Volume Two, swapped here for sparse instrumentation and a focus on Deschanel’s vocals, a decision that yields mixed results. It is no secret that Deschanel’s talents as a vocalist are limited, but what she lacks in range she makes up for with abounding adorableness – a measurement that is not to be ignored when discussing Christmas music.

On tracks like opener “The Christmas Waltz” and “Christmas Day”, her vocal vulnerability lends an undeniable layer of sweetness, but on others such as “Rockin’ Around the Christmas Tree”, her inability to belt it out leaves the listener unfilled. That song at least is salvaged by Ward’s precision guitar playing, which is tasteful and subtle throughout the record, almost to the point of being underused.

The album’s finest moment is the pair’s duet on “Baby, It’s Cold Outside”. The vocal interplay between Deschanel and Ward, the whistling bridge, and the brush-stroked snare make for an irresistible two minutes and 17 seconds, and it’s by far the band’s most successful attempt at making a retro Christmas album for hipsters.

Ultimately, A Very She & Him Christmas is an enjoyable if forgettable project that its creators probably had a very fun time making. It is background music for baking cookies and wrapping presents. Nothing more, nothing less.