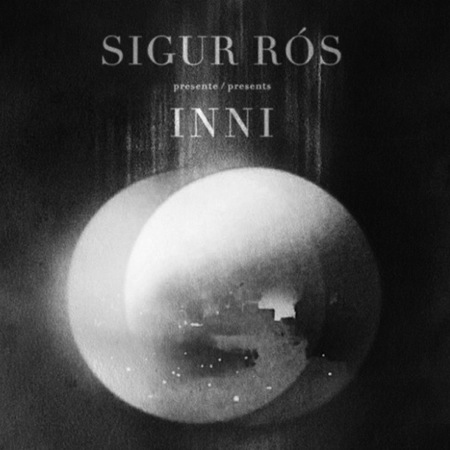 I’ve often let the cool, ambient sounds of “Svefn-g-englar”, the expansive opening track from Sigur Rós‘ second studio album, transport me out of an otherwise pedestrian, dreary moment of existence. Sigur Rós has a way of melting away the mundane and making anything, whether it’s walking down a tourist-filled Manhattan street or riding a crowded subway car, seem sublime. But “Svefn-g-englar” isn’t really a song you can rock out to; even the heavy, minor key modulation halfway through the tune feels like a temporary detour on an otherwise Elysian idyll.

If you do want to rock out to “Svefn-g-englar”, get yourself a copy of Sigur Rós’s new double live album, Inni.

On the studio version, that key change is an interesting break from the static inertia of the song’s blissful harmony. On the live version, that key change bowls you over like a Memorex tape ad, all noise and distortion, with lead singer Jónsi Birgisson’s ethereal falsetto transposed into his guttural middle range. Underneath the string arrangements, behind the ambiance of a swimming pool studio, and free from the vistas of a geothermally alive Icelandic landscape, Sigur Rós reminds us that, indeed, they are a rock and roll band, nothing “post-” about it.

In essence, that is the point of Inni. Pull back the curtain, strip away the embellishments, and let the parts shine on their own. Drawn from all five studio albums, the performances on Inni are raw, they are powerful, and they show this band donning a darker, noisier sonic presence. “NÃ½ batterÃ­”, another track from their breakthrough second album, ÃgÃ¦tis byrjun, demonstrates the immediacy of the live version compared to the gloss of the studio version. On ÃgÃ¦tis byrjun, the opening noise is followed by a fat, round bass line, a velvety undercurrent beneath the continued drone of synthesizers and a wandering flute. On Inni, that same bass line has a more deliberate articulation, a pointed human agency behind the sounds. Bassist Goggi Holm is right there; he’s plucking the notes; they’re not just emanating from this ethereal musical fabric. When the song breaks out into something bordering on hard rock, it’s like a sinister triumph, with Birgisson screaming his falsetto climax over crashing cymbals. Orri Páll DÃ½rason’s drums are much higher in the live mix, bringing fresh vitality to the overall sound.

In a way, Inni contradicts the image that Sigur Rós has cultivated for itself. Their 2007 DVD Heima contains a segment where the band, all clad in acoustic instruments and toting along a string trio, is crammed into a small, simple room. There’s an implied organic-ness, simplicity, and folksy homeliness to it all. Even without the direct influence of Heima, there is a certain exotic, frozen mythology to Sigur Rós in the mind of the American listener. The barrier of language is heightened by the utterly alien landscapes of Iceland itself and the otherworldly quality of the music.

Inni attaches real people to this totemic image: At the heart of it all, it’s four guys playing music and singing, with all their naked humanity on full aural display. And that, for me, is the one downside to this live album. Ironically, it’s also the best thing about it. Inni brings Sigur Rós and their music down from Olympus; it reminds us that they are mere mortals after all. Towards the end of the album, the band does provide a few “seeing God” moments of apotheosis, complete with the crescendo and climax that form the essential component of their best songs, restoring them to demigod status. “Festival”, the centerpiece of their most recent album, MeÃ° suÃ° Ã­ eyrum viÃ° spilum endalaust, rears its fire-breathing head even more fully with DÃ½rason’s frenetic drumming in full force.

The show closes with a 15-minute version of Track 8 from their untitled ( ) album (called “PopplagiÃ°” in live performance), possibly their most intense, passionate, and truly epic composition. This version exploits the live circumstances perfectly: It feels gritty and immediate, but the live energy brings you to that lofty place that you want Sigur Rós to take you. After the ejaculatory peak of crazed drums and heavy metal guitar, Inni closes with a bonus studio track, “LÃºppulagiÃ°”, whose light ambiance is as necessary as a post-coital cigarette. After a nearly two-hour live show, the return to studio subtlety on “LÃºppulagiÃ°” has a melancholy quality. It feels like a post-rock elegy for the rock band that just blew your mind.