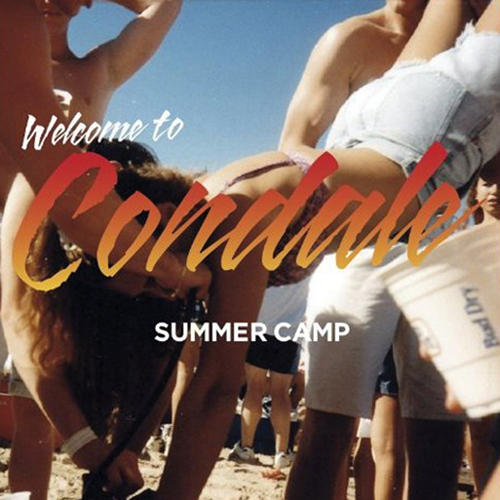 When it comes to reviewing debuts of up-and-coming acts, the standard approach is to draw parallels to similar bands. For Elizabeth Sankey and Jeremy Warmsley, aka Summer Camp, that comparison will inevitably be towards not another band or sub-genre, but filmmaker John Hughes. Produced by Pulp’s Steve Mackey, the London duo’s debut album, Welcome to Condale, is the musical equivalent of a long-lost Hughes film from the 80s.

Rather than Hughes’ nonexistent Chicago suburb of Shermer, the tale of Summer Camp takes place in fictional Condale, California, a fitting locale as the album sounds as summery and full of sunshine as the band’s name implies. Opener “Better Off Without You” is pure 80s synthpop impeccably paired with Sankey’s soaring vocals, a combination that would give any adolescent’s broken heart some much-needed empowerment. It’s the kind of track that’s so impossibly infectious that it should become a radio hit that is ridiculously overplayed but still beloved decades later.

When Welcome to Condale isn’t loud and forcefully poppy, it can be surprisingly eerie, such as on the distorted “Nobody Knows You”. On “Losing My Mind”, Summer Camp is simultaneously both, thanks to a hint of catchiness in light harmonies in an otherwise wistful ode to that which never truly was. The pubescent mind is not only experiencing new thoughts and feelings but doing so with an intensity unique to the age, and Sankey and Warmsley explore both the ups and downs of coming-of-age, although with a more positively nostalgic slant. Deepest in the dark end of the spectrum is “I Want You”, a stalker song in the grand tradition of creepy tunes that are more often than not mistaken for love anthems.

Do children and teens still go to summer camp in the 21st century? Besides day camps and the occasional week-long retreats centered around musical or sports themes, the act of going away for a summer in the woods to awkwardly discover the opposite sex and make the best of frenemies seems to be a casualty of the digital age of fear. On Welcome to Condale, Summer Camp evokes the feeling of an idealized vision of these adolescent days of summers past with some bittersweet and irresistibly catchy pop songs.

Essential Tracks: “Better Off Without You”, “I Want You”, and “Ghost Train”