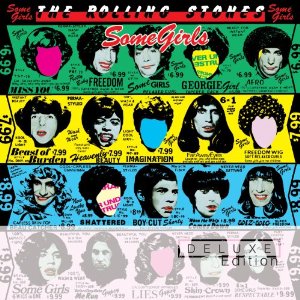 In 1978, things weren’t looking so hot for The Rolling Stones. Most, if not all, of their earliest counterparts – The Beatles, The Animals, and The Byrds included – had either burned out or faded away years before, and two blockbuster new movements (i.e. punk and disco) were coming into full effect. Making matters even worse was the fact that the band’s previous three albums – ‘73’s Goats Head Soup, ‘74’s It’s Only Rock ‘n Roll, and ‘76’s Black and Blue – though by no means disastrous, didn’t quite touch their now-classic predecessors Let It Bleed, Sticky Fingers, and Exile on Main St. Needless to say, this wasn’t a time to mess around; the Stones’ next move had the potential to make or break their career, or at least give strength to the threat of irrelevancy. So, they worked some classic Stones kind of magic.

Some Girls, that next move, worked. On the strength of the steamy disco of “Miss You”, the Clash-like rollick of “Respectable”, the riff-based balladry of “Beast of Burden”, and the racy electric blues of the title track, the album soared to the top of the pops and stayed on the American charts for 82 weeks. With over six million units moved, it’s the band’s best-selling album to this day. Unsurprisingly, it was a critical smash, too. Upon its release, Robert Christgau, writing in The Village Voice, called it the band’s “best album since Exile” and “their easiest since Let It Bleed or before.” He was right. Suddenly, the Stones were interesting and important, all over again.

The reason we’re talking about the album now is that, like Exile last year and Get Yer Ya-Ya’s Out! in 2009, the Stones’ camp has remastered the original album and excavated lost tracks from its sessions (which took place in Paris in late ‘77 and early ‘78). And you know what’s amazing? From the beautiful country-rock of “No Spare Parts” to the soaring ramble of Hank Williams cover “You Win Again” to the grimy boogie of “Claudine”, the recently unearthed tracks are simply sensational. Some of them have been sitting in the vaults, completed, for the past 33 years, while others were touched up or fleshed out in recent sessions with producer Don Was (check out Keith Richards’ vocal on “We Had It All”). All are worth your time.

As great as those tracks are, though, it’s easy to see why they didn’t make the cut for the original Some Girls. If “Do You Think I Really Care”, “No Spare Parts”, and “You Win Again” were on the final album with the notorious “Far Away Eyes”, it would have been an overtly country-heavy outing and, perhaps, a difficult sell. Similarly, throw “Tallahassee Lassie” and “So Young” on there with “Lies”, “Respectable”, and the Richards-led “Before They Make Me Run” (an allusion to his February 1977 heroin bust), and you have a quick and dirty album that probably wouldn’t have gone over too well with the Stones’ newest fans (the band’s biggest singles of the mid-’70s were the smooth ballads “Angie” and “Fool to Cry”). But put all 22 of these tracks on shuffle, and you’ll get an unrelenting, usually exceptional double album that has only one odd moment (“Petrol Blues”, a 90-second piano demo that, judging by the virility of Mick Jagger’s vocal, sounds like it was recorded in 1965). Incredible.

At the end of the day, this reissue does more than highlight the original Some Girls album. It shows that the Some Girls era was, and remains, one of the most productive of the Stones’ career. Even greater than that, though, is that it all came when the band was in dire need of a spark. They were forced to adapt, and adapt they did. That’s clutch. That’s something to cherish.

Essential Tracks: “Do You Think I Really Care”, “No Spare Parts”, and “You Win Again”