The Who – Quadrophenia [Super Deluxe] 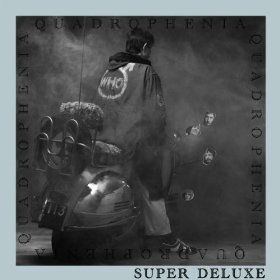 The Who‘s Quadrophenia is not their best known album (that would probably be 1969’s Tommy), nor is it the one with the most hits (1971’s triple-platinum Who’s Next). No, Quadrophenia is The Who’s forgotten masterpiece, with barely any presence on classic rock radio save for the occasional “deep cut” lip service to “Love Reign O’er Me” or “5:15”. Yet this album is perhaps The Who’s finest, the zenith of Pete Townshend’s considerable songwriting talent, with standout performances from every band member. It’s their most complete work of art. Make no mistake about it, this is one of those albums, a guaranteed five-star offering, up there with Exile on Main St., Revolver, Dark Side of the Moon, and Days of Future Passed among the late ’60s/early ’70s British rock pantheon.

So why only three and a half stars?

It’s tough to rate what is essentially a box set re-release of a legendary album. Most importantly, this is not a review of the music of Quadrophenia as it was released in its full, glorious double LP form in 1973. Nor does it take into consideration the sizable goodies included in this box set, including essays by Pete Townshend and others involved in the recording, extensive photos, original handwritten lyrics, and sleek packaging. The two new musical components of this box set, the Jon Astley remaster of the original vinyl mix and the 25 Pete Townshend demo tracks, get three and a half stars.

As for the remastering, the sound of the original was brilliant, with crisp guitars, John Entwistle’s bass nimbly popping into the mix, Keith Moon’s thundering drums resounding, and Roger Daltrey’s clarion voice cutting through it all. Plus, Astley already remastered Quadrophenia in 1996 for the CD re-release, evening out the balance and bringing Daltrey’s vocals to the fore, while crisping everything up. If you’re a producer or an audiophile, or you’ve only heard the album on poorly ripped mp3s, you’ll appreciate what Astley has done here. But for the majority of listeners, the original mix was already so well-balanced and shimmering that chances are you won’t notice the difference.

The real treasure in this box set is the wide spectrum of Townshend’s demos for the album. Yet most of these are curiosities and telling for the fact that they weren’t included in the final cut. Quadrophenia is a narrative concept album, featuring the story of Jimmy, a moody mod with split personality disorder. This schizoid psyche is implied subtly through the instrumental “Quadrophenia”, which combines four different musical ideas, and suggested through other psychologically penetrating lyrics, such as those for “The Real Me” or “Is It in My Head?”. Townshend was smart to leave “Quadrophenic Four Faces” on the cutting room floor, as it just gives the idea away too blatantly, hammering the point home too hard for the listener. Other demo songs, such as “You Came Back”, don’t deepen Jimmy’s character at all. There are a couple of instrumental tracks that would have been entirely out of place on Quadrophenia, but they offer a fascinating glimpse into the musical mind of Townshend, such as the ELP-flavored “Wizardry”, a very uncharacteristic prog rock experiment, or the plaintive piano chords of “Fill No. 2”. It would be a shame if any of these tunes were brilliant, and fortunately, none of them are.

The most illuminating demos are those for the songs that made the original cut, but in a highly modified version. The original “The Real Me” is surprisingly funky and a lot of fun, much slower and more relaxed than the high-energy, adolescent angst-filled end result. “Drowned” lacks the signature opening piano riff, replaced instead by acoustic guitar, an interesting but vastly inferior alternative to the final version. The album’s closing jewel, the breathtakingly powerful “Love Reign O’er Me”, is more introspective in Townshend’s original, whereas Daltrey turns it into a primal scream, the album’s ultimate moment of catharsis. Thank god for Roger Daltrey.

The Who have also provided a number of options for purchase if the full box set breaks the bank, including an mp3 download of just the music and an iTunes interactive site. Diehard Who fans shouldn’t even hesitate to get the full box set, but unless you’re a completist, an audiophile, or you just go batshit for esoteric rock music history, you’ll be better off listening to the original.

Essential Track: “The Real Me (demo)”