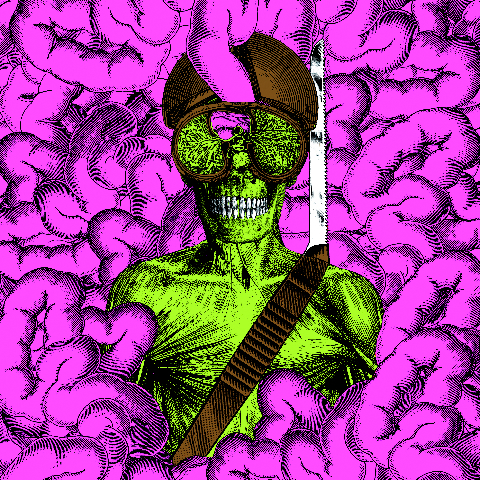 San Francisco garage rock outfit Thee Oh Sees have been making music, be it as a full lineup or as frontman John Dwyer’s solo project, for several years. This past May’s Castlemania was a peak for the band, a point in their recorded output where they demonstrated just how tight and lethal their sound is. For their second album of 2011, Carrion Crawler/The Dream, the group outdo themselves by being just as succinct while demonstrating an even greater sense of accessibility for their often bizarre, always intricate blend of noise.

Seemingly, nothing has changed about the band. The effort is still 10 tracks of pure garage rock madness, with a heaping serving of old-school psychedelic music mixed in. Take, for instance, tracks like “The Dream” and “Robber Barons”. The former is full of every typical aspect that, for better or worse, exemplifies this mix of rock sounds: rollicking, burned-out-sounding guitar riffs; organ parts that sound like they melted on the floor of the Mojave Desert; and, since no track would be complete without it, loads of yelping. The former is extended to the point of being long-winded. Though it clocks in at a mere five minutes, the methodical, hazy sheen of the track makes it feel like a much longer experience. In short, aficionados of the band will still eat this new material up like ravenous beasts.

Yet there’s something mesmerizing and truly approachable to each and every cut, enough to draw in even those who’ve never taken the trip. There’s an X-factor to the arrangements and songwriting tactics (along with a certain charisma and reverence that the guys’ playing exudes) that extends these cuts into a new realm of fandom. And that fanfare is still to be found, even in obscure album cuts like the micro-punk explosion of “Wrong Idea” or the short, twisted journey of “Opposition”. The band have created an effort that digs its way into the listener’s ears through an honest approach. Here’s to continued prosperity.