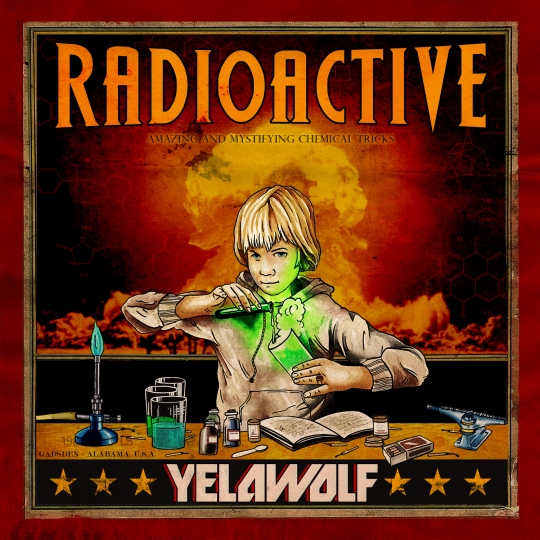 With his working-class Alabama heritage, unflattering quasi-mullet, and mom-honoring tattoos, Michael “Yelawolf” Atha is no one’s idea of a rap phenomenon. But if you’ve spent any amount of time with his breakthrough 2010 mixtape, Trunk Muzik, or its revised edition, Trunk Muzik 0-60, you can testify to the fact that he’s a much more adept emcee than he might appear to be – see the eerie thump of “Pop the Trunk” or the Raekwon-featuring “I Wish”.

So, after those tapes and high-profile collaborations with the likes of Big Boi and Tech N9ne, here’s Radioactive, Yela’s Shady Records debut. Things come out of the gate quickly with the bare-bones intro and ”Get Away“. On both tracks, Yela blitzes through the beats with the same stunning technicality that‘s all over both Trunk Muziks. The best moment here is the Killer Mike-abetted “Slumerican Shitizen”, in which both emcees deliver characteristically mouth-foaming verses over crunching electric-guitar riffing.

Somewhat predictably, things go awry when the radio-ready, guest-provided hooks (mostly from upstarts including Mona Moua and Priscilla Renea, who sounds a bit too much like Rihanna) show up. The hooks themselves can be enjoyable, but they just don’t bode well with Yela’s aggressive delivery; any intensity he builds up is usually drained when someone else grabs the mic. Still, the peaks overshadow the valleys here, leaving an adequate showing from a guy who deserves to be taken more seriously than his looks and background might warrant.

Essential Tracks: “Hard White (Up in the Club)”, “Slumerican Shitizen”