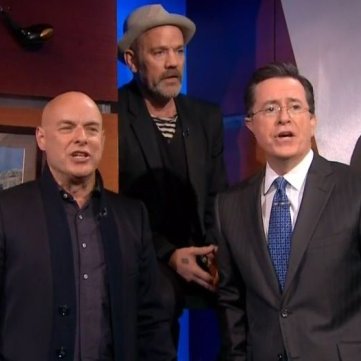 Brian Eno, world-renowned genius. Stephen Colbert, national treasure. On Thursday night, the two wildly diversive minds collided on The Colbert Report. There, Eno digressed on his current and forthcoming inventions, more specifically the basis behind his new EP, Panic of Looking, and the complexity of his latest masterpiece, 77 Million Paintings. The latter installment, which we recently observed at this year’s Moogfest, offered an extraordinary challenge for Colbert, who asked Eno how long it would take to see each of the 77 million paintings. Eno replied, ”If you waited about 400 million years, you might see the complete repertoire.” Naturally, Colbert wasn’t dissuaded by the number.

Following the interview, Colbert stepped aside to discuss R.E.M.‘s forthcoming greatest hits package, Part Lies, Part Heart, Part Truth, Part Garbage 19822011, surprising everyone by bringing out the band’s frontman Michael Stipe. After literally placing Stipe on his own rock ‘n’ roll hall of fame shelf, Colbert brought Eno back out, and the three of them finished the show with a charming cover of Bill Withers’ “Lean on Me”. Funnily enough, it was the same track that only moments before Colbert had asked Eno to sing in the near future. Perhaps time really isn’t a problem for the host.

Check out video replays for Eno’s interview and the performance of “Lean on Me” below.