Check Out: Aleon Craft feat. George Clinton – “Make It Out” 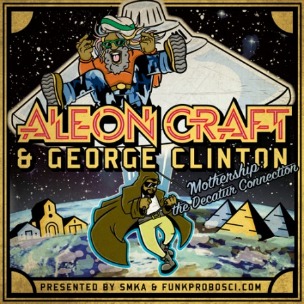 On December 20th, ATL rapper Aleon Craft will release Mothership: The Decatur Connection. If you’re wondering if the title’s an ode to Parliament, well, it is. Joining him on the interstellar hip-hop experiment is P-Funk’s legendary leader George Clinton, whose work has figured prominently in Craft’s earlier material (see: the Mothership Decatur mixtape).

According to Okayplayer, Clinton ”recorded to 3 new records for the project, while the rest of the release consists of elements from Aleons Mothership Decatur mixtape and choice selections from the Parliament-Funkadelic catalog and original recordings from both Aleon Craft and George Clinton.”

Our first listen of the two together is on “Make It Out”, a sly, soulful burner that finds Craft aping a little from fellow local Andre 3000 (at least vocally). If you’re wondering, Clinton warps in during the chorus. Check it out below, and keep your radar on for more cuts to surface ahead of its release.