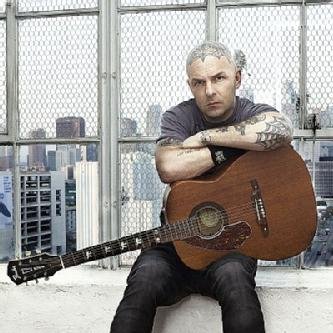 Tim Armstrong is a punk through and through. The former guitarist for the seminal Operation Ivy is now the frontman for Rancid, the man behind the supergroup the Transplants, and the head of Hellcat Records (label home of Tiger Army and the HorrorPops). It is almost impossible to talk about punk music in the last 25 years without mentioning the undeniable influence hes had on the culture as a whole.

Armstrong also just so happens to be a really big fan of musical theater.

Kicking off last month, Armstrong and longtime collaborator Dave Robertson have created Tim Timebombs RockNRoll Theater. Its one part off-Broadway musical spectacular, one part Twilight Zone, and all punk rock. The first episode, entitled Dante, modernizes the Inferno, a section from Dante’s Divine Comedy, with Armstrongs Rancid bandmate Lars Frederiksen cast as a sleazy businessman who goes to hell and finds the pit to his liking. The music is perfectly in line with the over-the-top stuff youd expect in any musical, but with a heaping helping of punk ethos and gnarly attitude. Case in point of how bizarre the whole affair truly is? AFIs Davey Havok plays the Devil in the first episode.

He had a cool take on it for sure, Armstrong adds in his decidedly unique speech pattern, slow and deliberate and focused like a DIY sensei. Davey actually had five different suits, but he went with the pink one.

Aside from bringing their own wardrobe, working with one’s friends translates to reliability, something Armstrong is well aware of in his creative worldview. The project exemplifies Armstrongs belief in and continual practice of creating art with the same people over and over again, developing a true communal vibe and making everything 100% collaborative.

Its a brand new planet for me, but Ive got the same crew and the same feel, Armstrong says. So, its as natural as anything Ive done for me because I use a lot of the same peeps. But I want to keep making these and keep telling more stories. I want to see how it lands and what stories and songs and friends we can bring in. I want to make time for these.

Creating hours in the day is just what Armstrong might have to do. When hes not reinventing musical theater, he is hard at work tackling his biggest collaborative project to date: working with legendary ska/reggae artist Jimmy Cliff. Cliff and Armstrong will team up for two Cliff releases: an EP that hit streets last week and a full-length to drop sometime in 2012. As a guy who has been everywhere in the music business, even Armstrong is a little starstruck in the presence of the icon.

Its a thrill to work with a real legend, Armstrong says. But hes also a real great person and just a cool human being. When I met him, he had a guitar in his hand, and we started playing right away.

While Armstrong has spent the last two-plus decades as the head of a band and leading the charge creatively, the project with Cliff sees Armstrong take on more of a supporting role. Something, hell admit, hes more than happy to do.

We invited a full band to back him up, and we called it the Engine Room, Armstrong says with a snicker, something you might not expect from a legend known for angsty snarls, but which sounds real and fresh from a guy living a long-standing dream. And were really just trying to back him up and really help him to do him. I love the role of a producer with his guidance. And all of us are focused on the fundamentals of playing live rock and roll. Were all really in the pocket, really locked-in and focused.

That project, as is the case with so much of Armstrong’s career, simply doesnt have his undivided attention. This year marks 20 full years for Rancid; a landmark as gargantuan as that requires the proper attention, which itll receive in 2012 with a huge world tour and, more importantly, new material. But even after all this time, and with seven previous albums under their collective belt, Armstrong still celebrates his time with his friends/bandmates.

Im going to have dinner with (bassist) Matt Freeman tonight, Armstrong says during our interview. Hes my brother, and Ive known him my whole life, since I was five years old. Were always going to be a band, and were never going to break up.

And that dedication to one another stems back to Armstrongs aims to keep the same people in his creative circle. The band plans to hit the studio at some point in the next couple months with Bad Religions Brett Gurewitz (Hes like a part of the team, Armstrong adds), who helped helm several past Rancid albums, including 2000s Rancid and their latest album, 2009s Let the Dominoes Fall. And just like theyve always been, the sessions will be a family reunion, a celebration with wives and kids and the whole affair. Itll also be just another record where the band painstakingly map out who they are as a unit at that very point in their career.

Every record we document where we are, so we dont know what itll be, Armstrong says. Each album shows us where were at in that moment in time, with the songs and the feelings that were experiencing, so it can change a lot in the next couple months.

Add future recording plans with the Transplants (who have studio time slated for next month), and Tim Armstrong is one very busy man. But he likes it that way, something hes more than willing to tell you as passionately and as often as he can.

I am lucky in what I do. I get to do the things that I love, and I have the coolest gig ever. I try to do everything at once, but I just cant do everything.

Not that he wont try.