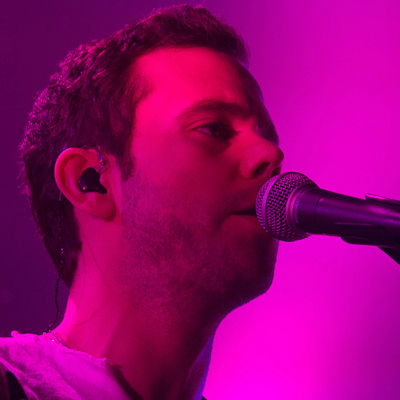 There’s not a lot of space on stage at Chicago’s Lincoln Hall. Then again, when you’re dealing with an act like M83, it’s sort of an oddity in itself that a group of such sonic caliber can even come to life in the neighborhood venue. (Fact #1: Capacity is capped at 507.) But, it’s become a sort of mainstay in the Chicago music scene, and it’s a historical facet of an equally historical neighborhood. (Fact #2: The building dates back to 1912, when it was originally called The Fullerton Theatre.) For the first of two sold-out shows last night, Anthony Gonzalez and his team of atmospherics turned the joint into an interstellar arena.

Maybe it’s because they just performed at Moogfest, where they took up real estate at the Asheville Civic Center Arena, or perhaps it’s just that their sound lends itself to wide-open spaces, but there were certain hesitations about how they’d pull off the show. For one, have you heard their latest LP, Hurry Up, We’re Dreaming? With wall-crumbling anthems like “Steve McQueen” or “Midnight City”, it’s almost as if Gonzalez crafted these tracks to take over the likes of Wembley Stadium. Surprisingly enough, the venue’s intimate environment worked to their benefit.

Though before M83 hit lightspeed, Los Angeles’ Active Child offered up a tight 45 minutes of blissful, cosmic electronica. But, it’s more than that. There’s hints of soul, a dabbling of post-dub step, and tinges of alternative. It’s smart stuff. Similar to Andrew Bird, singer-songwriter/harpist Pat Grossi champions the true being of a musician, and goes further. On stage, he’s determined, assured, and without error. It’s this weight of severity that draws you in. During the somber “Johnny Belinda”, his delicate choir-like vocal drew countless eyes and a handful of hearts. Hardly anyone reached for a cell phone, or paid much attention to their drinks. They just…stared. Then it was over.

Not for long. The next hour belonged to Gonzalez. With such a short time frame (’twas an early show, after all), there was hardly a minute spared. Still, they saved time for the theatrics. Prior to the performance, the weird creature thing on the cover of the “Midnight City” single gesticulated to the crowd, only to disappear. This brought out the band, who stuffed themselves into the tight confines. The Zola Jesus-less “Intro” passed by, so did the heroic guitar solo of “Kim & Jessie”, and then more new material ushered on through: a succinct “Year One, One UFO”, a starry (literally) “Wait”, and a victorious brush with “Steve McQueen”. Fans combusted during “Midnight City” (admittedly, the lack of a sax solo hurt – hire someone, folks) and cooled off with “A Guitar and A Heart”. This all happened in less than 50 or so minutes. No lie.

Of course, there was an encore; although, this tagged the night’s most triumphant moment. As the band conjured up the always sleek and sexy “Couleurs”, newcomer guitarist-bassist Jordan Lawlor stood atop the bass drum, inciting the audience to clap, while also looking catatonic and slightly dazed (those poor mine kids from Indiana Jones and the Temple of Doom come to mind). Within seconds, the venue’s crowd – all 507 of ’em – jumped up and down erratically. For six to seven minutes, people just lost their shit, enjoying this mini arena rock show unfolding before their eyes. Just great.

You know, it’s slightly ironic (though, this could pervert the use of the word, who knows) seeing an all encompassing double LP come to life in such a small medium. But, paradoxically, it actually made for a better show – at least according to the sweaty, elated fans that stumbled out onto Lincoln Ave after. (Fact #3: In 1934, the FBI shot and killed John Dillinger directly across the street. Sharpshooters were even placed atop Lincoln Hall.) The unbelievable truly happens here.

Setlist:
Intro
Teen Angst
Kim & Jessie
Year One, One UFO
We Own the Sky
Steve McQueen
Wait
This Bright Flash
Midnight City
A Guitar and A Heart
Encore:
Couleurs
——

Previous Story
Album Review: The Antlers – (together) EP
Next Story
Check Out: Jens Lekman debuts "I Don't Know What To Do With This Information"
Popular
More Stories
[fu-upload-form form_layout="media" title="Submit Your Photo"][input type="hidden" name="ugc" value="1"][/fu-upload-form]