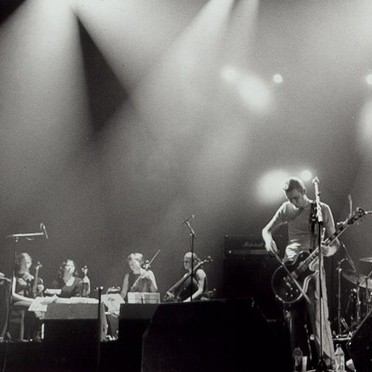 On the heels of their new concert film and live album, INNI, Sigur Rós have announced plans to release a new album next Spring. As The Wall Street Journal reports, following Jónsi’s 2010 solo tour, the Icelandic collective “went straight to work at their studio, set in a space once occupied by a swimming pool.” Although the initial sessions proved difficult, “the quartet soon found its new focus.”

That new focus, however, resulted in “an ambient album,” at least according to drummer Orri Páll DÃ½rason. Although a vague description, the band’s other members had plenty of other adjectives to describe the as-yet-to-be-titled sixth LP. Bassist Georg “Goggi” Hólm calls it “introverted,” singer and multi-instrumentalist Jón Jónsi Ãór Birgisson thinks it’s “floaty and minimal,” while DÃ½rason added it has “a slow takeoff toward something.”

If you recall, Sigur Rós’ last album was 2008’s phenomenal MeÃ° suÃ° Ã­ eyrum viÃ° spilum endalaust. In the time since, the group has been on a hiatus, although frontman Jónsi has been quite busy. Last year, he released his own solo effort, Go, and most recently, he scored Cameron Crowe’s forthcoming film, We Bought a Zoo. Currently, the aforementioned concert film is making its rounds across the nation, with its commercial release set for release November 15th via XL Recordings.