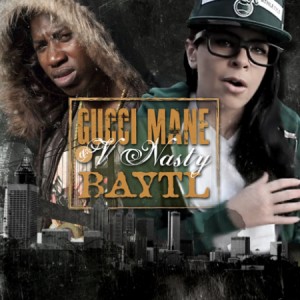 The n-word loving Kreayshawn sidekick and White Girl Mob member V-Nasty teams up with ice cream-loving Gucci Mane to make a collaboration that no one asked for. Although the pairing comes as a surprise, the mixtape boasts unimaginative lines that fall flat. In fact, BAYTL can only be appreciated if looked at for its sheer novelty appeal, thanks to V-Nasty’s laughable attempts at rapping.

At one point she claims she’s “more hood than David Banner” (Banner took issue with her nonchalant use of the n-word), and from then on it’s obvious that she can’t be taken seriously. On every track her obnoxious and nasally voice overshadows what could have been a win for Gucci, had he dropped the Bay Area brat from his ATL style. As if her act isn’t already unconvincing, so too are her over-the-top wannabe bad bitch rhymes that obsess over “bitches selling pussy” more than even Gucci himself cares to.

The Ice Cream Man, for the first time, throws some variety into his syrupy slow rhymes, which is enough to make him look like Biggie Smalls reincarnated next to V-Nasty’s lack of talent and originality. Simplistic beats powered by long-time Gucci collaborator Zaytoven suit him well, and he sounds comfortable on each track. He gets extra points for some of the clever (for him) lines he delivers, such as, “I’m not romantic but I cook my dope candlelit” (“Out My Circle”). Still, it’s not enough to save BAYTL from being just another unnecessary, forgettable mixtape.

Play this once for the WTF-moments (Gucci: “You know she gobble on my balls like they crunch n’ munch”; V-Nasty: “No need for a preacher. Pray to me. I’ll be your father”), and then be glad the end of the year is almost over, so we can put this all behind us and forget about it.

Essential Tracks: “Out My Circle”