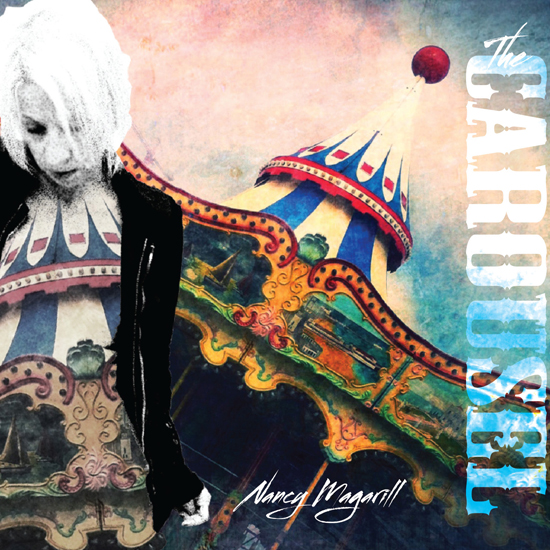 Don’t be afraid to step right up and take a spin on The Carousel, the new record from New York-based singer, producer, and composer Nancy Magarill. Sure, a few of the horses might be missing and the wooden seats are a little rough, but it has its charm. (And it’s safe, I promise.)

Most of the album is a pretty, string-laden singer/songwriter affair, with the musical arrangements being particularly praiseworthy. “Boom” is Magarill at her soft, sweet best and the minimal strings complement her morose-yet-beautiful singing. “The Circus is Back in Town” plays a bit on the big top theme invoked by the album’s title by contrasting a playful harmonium backing against Magarill’s sad lyrics. It’s not all this melancholy, however: “Where are all the Beautiful People?” shows off a brighter, pop-centric side to the singer.

Now, for The Carousel‘s rough parts. Magarill lets her singing take back seat to spoken-word poetry in “Falling”, only chiming in to sing the chorus over unexciting electronic chitters and bleeps. It feels bizarrely out of place here amongst all of the moody string ballads, and sucks much of the well-built atmosphere from the dead center of the album. Later on in “I Am Not A Monster”, Magarill sings a chorus of “I am not a slut, a cunt, a fuckin’ bitch,” which comes off less empowering than it does gratuitous. (Fortunately, that’s a singular offense; the songs are lyrically strong throughout the rest of the album.)

Magarill’s put together a mostly solid record, with a few great songs and a few stumbles spattered in between. The Carousel has a lot to love despite these lumps; Magarill’s clearly a multi-talented artist, but you have to wonder what this album could have been with some more polishing.

Essential Songs: “The Circus is Back in Town”, “Boom”