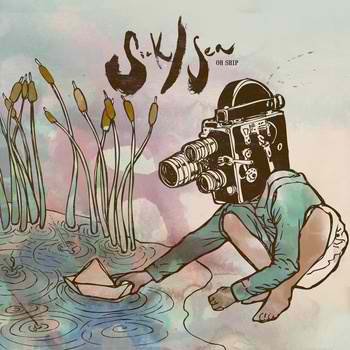 It’s rare that you’ll find Bandcamp EPs from new groups that sound as fully-formed as Sick/Sea’s Oh Ship. Charisma runs a long way in the music world, and Sick/Sea’s lead singer, Audrey Scott, coquettishly navigates through these five short pop songs like a hybrid of Camera Obscura’s Tracyanne Campbell and Combustible Edison’s Miss Lily Banquette. While her vocal is the trio’s most prominent weapon, the instrumentals are tightly constructed and surprisingly well-executed. It’s an impressively professional affair, if not particularly multi-faceted.

The EP leads off with “Camper’s Combo”, a sweet number that stops short of becoming too sugary; Scott sings about making the best of a crummy camping trip over a shuffling beat and goo-ily echoing surf guitar. It’s hardly weighty subject matter, but it matches the light tone in a pleasantly uplifting fashion. Muted brass ushers in the loungey “Talking Doormat”, and some pangs of loneliness seep out in “For the Holidays”, but these more heartsick moments are somewhat undermined by their mostly-upbeat backing. Even the kiss-off number “Convenient” sounds far more sanguine than angry with its playfully jazzy bassline. It’s all quite pleasant, but the EP shies away from showing any other emotion than ‘chipper’.

As charming as it is, Oh Ship is not the most gravid release, breezing by at such a lightfooted pace. There’s little here to really sink you in as far as depth goes, but that should be easily rectified if and when these three compile a wider variety of songs for a full-length. (Once you listen to it, you’ll be eager to hear her take on something deeper.) As an EP, it’s absolutely worth sampling; while it probably won’t hook you for more than a handful of listens, it should earn the band a spot on your radar for their future releases.