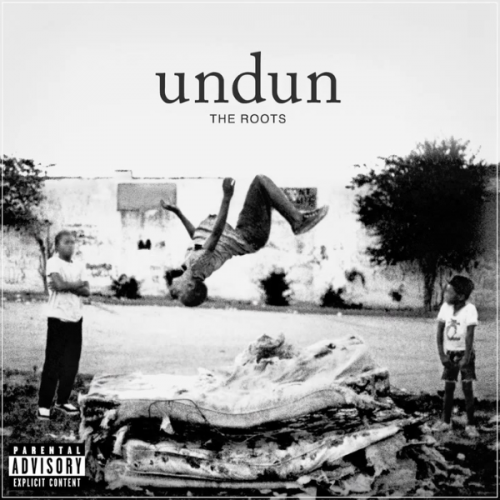 For being the house band of a late-night comedy show (to wit: Jimmy Fallon’s), The Roots sure are taking things seriously these days. undun, the Philadelphia hip-hop octet’s first-ever concept album, chronicles the struggle of Redford Stephens (inspired by Sufjan Stevens’s Michigan cut “Redford”), a semi-fictional 25-year-old who enters the world of pushing drugs as a means of escaping poverty. The twist? The tale begins at the end, as the buzz of an EKG flatline signals Redford’s death right after the opening track, “Dun“, commences. From there, the album traces Redford’s wrong turns that led to his all-too-early demise.

It shouldn’t be surprising, then, that undun is overtly bleak in its outlook. On “Sleep”, the ever-cerebral frontman Tariq “Black Thought” Trotter provides a glimpse into Redford’s mindset postmortem: “There I go, from a man to a memory/Damn, I wonder if my fam will remember me.” We quickly learn that Redford was a good guy at one point (maybe even always), but his long-acquired distaste for the hard-knock life led to an ultimately fatal vision of “oceanfronts,” “model chicks,” and “Benzes with camera plates.” A play-by-play of the rest of the album isn’t necessary, but suffice to say the storyline here is one of the saddest and most compellingly crafted in recent concept album history.

Anyone coming into undun expecting a series of three- and four-minute songs with traditional verse-chorus-verse structures (like what comprised last year‘s How I Got Over) will be let down; the whole thing zips by in under 40 minutes, and only half of its 14 tracks top two and a half minutes. Rather, it’s best to approach it as one cohesive statement that requires at least a handful of close listens to fully sift through. It’s not that the songs here aren’t affecting in and of themselves – a few of them, like “Make My” and “Tip the Scale”, rank among the band’s greatest moments this side of 2002’s Phrenology – but that the rhymes of any one song just don’t hold up well outside the context of the entire story. After all, the words here belong to Redford, not Black Thought nor any of the guests (Big K.R.I.T., Phonte, Dice Raw, among others).

Musically, the meat of undun matches its gloomy rhymes, save the borderline-funky “Kool On” and the aptly titled “Stomp”. The two most prominent pieces of The Roots’ usual sonic architecture are running on all cylinders here, as Kamal Gray’s minor-key electric piano work drips with melancholy and Ahmir “Questlove“ Thompson‘s ever-chunky drumming affords a scintillating humanity that no DAW-birthed beat could muster. Plus, with its top-shelf, nuanced production and engineering, the album simply sounds great. With that, even the most cursory listen (i.e. one that puts the storyline on the backburner) is rewarding.

Polishing off the festivities is a four-part, neo-classical suite that expands the original “Redford” and features piano work courtesy of jazz vet D.D. Jackson. After a wistful string quartet wafts through for the final time, an abrupt, funereal piano chord reminds us that Redford is still gone for good. Suddenly, the chorus of “Make My” rings truer than ever: “They told me that the ends won’t justify the means/They told me that the end won’t justify the dreams/That I’ve had since a child.“ All told, the story undun tells is sometimes chilling, often thrilling, and always illuminating.

Essential Tracks: “Make My”, “One Time”, and “Tip the Scale”