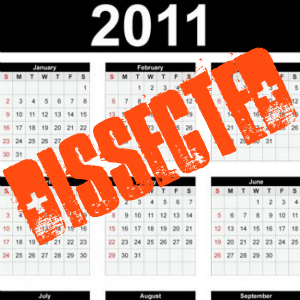 Welcome to a special edition of Dissected, where we usually disassemble a band’s catalog in the abstract, but we’ve decided to take 2011 via some stray thoughts and figures that fell through the cracks in our Annual Report. It’s exact science by way of a few beers.

Filing away the years becomes harder as you get older. Not because things are less significant, but because the memory is decaying at frustrating speeds. The cancer of time is tenacious son of a bitch, and it tends to erase things you once thought were important in favor of some benign fact like the drive-thru attendant at Taco Bell had two name tags and one said “Taco Belle.”

Year-end summaries, lists, recaps, and reports are just study guides for an exam that’s never happening, you guys. To me it’s less about ranking or quantifying albums and songs and more about a way to organize and remember what I might have otherwise forgotten about because I can’t remember anything anymore. So, before we close the file cabinet on 2011, here are some stray pieces that we’ve yet to organize, with some opinions thrown in for good measure. Let’s remember 2011 the way it was experienced: together while we argue over music.

Instrument of the Year: Saxophone

Lil B The BasedGod’s Use of Machiavelli As a Portmanteau, While More Strained, Is Better Than Wacka Flocka’s Use of It Because : Lil B spelled it correctly.

Album Art That Appealed Exclusively to No One I Know (At Least Publicly): Mr. Muthafuckin eXquire – Lost in Translation

Somewhere In The Middle: Death from Above 1979

Possible Thesis Topic for 2011 #1: Sandwitches and Video Games: How Punk Subversion Lost Its Teeth Through the Over-Saturation of Shock Lyrics and Good Looks.

What Two Rappers Should Hook Up Based Solely on How Filthy Their Sex Would Be: Danny Brown (“I Will”) and Nicki Minaj (“Dance A$$ remix”)

What Two Indie Stars Should Hook Up Based on How Gothy Their Sex Would Be: Erika M. Anderson (“Marked”) and Wes Eisold (“Villains Of The Moon”)

The One Thing MTV Did Right This Year: Adele performing “Someone Like You” at the MTV Music Video Awards

Possible Thesis Topic for 2011 #2: LOL at LMFAO: How This Avuncular Duo Continues to Make Millions Existing in a Patrón-Soaked Never Never Land

What the Fuck Am I Even Supposed to Believe in Now That Thurston Moore and Kim Gordon Have Split?: I don’t fucking know.

Possible Thesis Topic for 2011 #3: Bari-Saxy: The Re-Branding of the Saxophone As Texturally Essential (Or “Hey Doobie Brothers, You’re No Longer Ironic!”)

John Maus’ “Believer” Is a Great Song, But It’s Partially Ruined Not Because of His Statements Against Indie Record Stores, But Because Every Time I Hear It I Hear: Melissa Etheridge’s “I Want to Come Over”

Best Party in a Library:  Built to Spill & Atlas Sound at Carnegie Library

Remember When 50 Cent Said He Was Going to Write a Novel About Playground Bullying: You do now.

Best Ever First Move by a Patient Leaving a Psychiatric Facility: Gucci Mane getting a tattoo of triple-scoop ice cream on his face. Burr.

Best Time I Had With Readers of CoS: Hanging out in the chat room at the webcast of the final LCD Soundsystem show at MSG

The Scariest Thing That Happened in 2011: Miley Cyrus covered Gorillaz.

The Scariest Thing That May Happen in 2012: SOPA

The Best Thing to Happen in 2012: Your call. Make it happen.