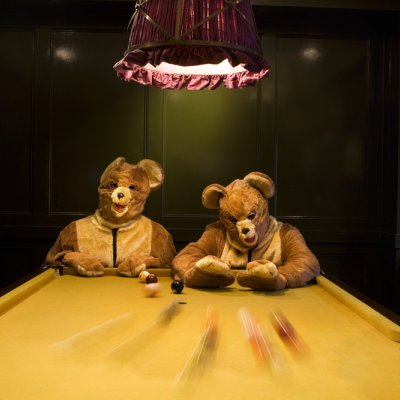 When members of dance-punk outfit Hot Chip aren’t tackling band business, they’ve got other musical outlets to focus on. Earlier this year, frontman Alexis Taylor worked with the About Group, while Al Doyle and Felix Martin have recently spent time as part of New Build. Not to be left out, Joe Goddard and fellow UK DJ/producer Raf Daddy, collectively known as The 2 Bears, will release their debut album, Be Strong, early next year.

The pair first came together in 2009 while DJing at London’s Greco-Roman parties. They’ve subsequently released three EPs and were recently featured on Death Cab for Cutie’s Keys and Codes remix EP. According to press for the LP, Raf originally recorded vocals over Goddard’s beats knowing they’d soon be recorded over; however, both men found the dichotomy of the glitchy beats and rough vocal stylings to be worth exploring further. The duo make a fractured sound that’s just as much dance music as it is soul music, working in tandem to create an effort that echoes “the glorious schizophrenic sound of a late night cab ride listening to a radio with a mind of its own.”

For our first taste of the record, the pair have released the music video for “Work”, which features a look into the lives of London’s eclectic working class. The track, meanwhile, is a rollicking dance number inspired by early ’90s, overly bright electro and house, with a grand, anthemic vibe to it. Check it out below.

Be Strong will be available digitally on January 31st via DFA Records, with a physical release due out in the spring. Peep the full tracklist below.