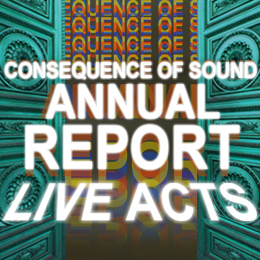 If you couldn’t tell from our collection of photos last week, we’ve covered plenty of live shows over the year. That’s why we felt it was unfair to peg one band as the best live act for 2011. It’s all about perspective, really. And genre. There’s an inordinate wealth of talent out on the road these days. From the arena downtown to the neighborhood bar around the corner, it’s a spoil of riches in any metropolis.

As the music industry evolves, you’re going to see more and more artists in your local concert halls. While not the most amicable predicament for them (you try living on the road; it sucks), it’s good news for fans everywhere. Music is meant to be experienced. Those long weeks spent staring at your ticket lying on your nightstand (or, in your office), it’s an exciting buildup. It’s probably the only situation involving music these days where we actually have to wait. For that reason, it’s pretty special.

Consequence of Sound put together a list of its five favorite live acts of the year. These were the ones that shook our feathers, the shows that had us saving our tickets, moving them from our nightstands and into frames, along with the posters. Hopefully, you did the same, too.

With a third album on the shelf (see: last year’s The Suburbs), one that clocks in at over an hour no less, Win Butler finally had an expansive catalog to use, and Arcade Fire has always hinted at bigger things. Their 2004 debut, Funeral, shined with songs like “Wake Up”, “Rebellion (Lies)”, and “Neighborhood #3 (Power Out)” – three tracks that could close out any festival worldwide. They just never had enough material to push their live show into the upper echelon of, say, the E Street Band.

In 2011, Arcade Fire took everyone to the suburbs. Following last year’s headlining performance at Lollapalooza 2010, mere days after releasing their third LP, the Canadian octet unearthed a surreal truth: They appealed to many. Thousands packed in to catch the group, who performed against a recently reunited Soundgarden. That was the spark, but the following year’s win at the Grammy was the ultimate bombshell. The fallout was an ensuing tour that captured and dazzled millions across the world. Songs sounded bigger, themes were understood, and the group appeared self-aware. They stormed around with an authority that just wasn’t there previously. On new tracks like the rollicking “Ready to Start”, the insightful “We Used to Wait”, and the driving “Sprawl II”, Butler & Co. took fans to another world. It was an arena rock show in the vein of Pink Floyd’s tour for The Wall. Songs became events. The band stood for something.

Personally, they hit at areas I can’t even begin to describe without sort of tearing up (e.g. lost moments, fractured nostalgia, bitter adulthood), but a part of me truly believes that anyone of any age in any place could feel the same way. That’s the sort of power any live band should try to grasp. Few ever do – yes, the E Street Band trademark this, too – but how about that? One of our acts made it. Admittedly, that’s a great feeling, and one we’ll be able to enjoy for years to come. Let’s just hope they don’t call it a day like their pal, Mr. Murphy. Doubtful. This is just the beginning. -Michael Roffman

When quizzed earlier this year about the possibility of reissuing his band’s seminal 1994 album, Dummy, in honor of its upcoming 20th anniversary, Portishead’s Geoff Barrow shut the idea down by explaining that alternate takes and bonus tracks simply weren’t a part of the band’s vocabulary. They either perfected a song, or they didn’t record it at all. Given their history, it makes sense. Nothing seems to describe Portishead’s approach to music better than that old adage about quality over quantity. The same overt perfectionism that’s limited the group’s studio output to just three albums in almost two decades has ensured that nearly every track on each of those albums is an immaculately crafted realization of the band’s musical vision.

More than perhaps any other act touring today, Portishead fuses virtuosic technical skill with visceral levels of performance quality, seamlessly blending all of the disparate styles and influences they’ve made their own throughout their career into pitch-perfect, seemingly unrepeatable performances of their material every time they take the stage. Regrettably, though, the group doesn’t tour much (especially not stateside), a fact that, for years, relegated accounts of their phenomenal live shows mostly to the stuff of legend.

This year, though, the group finally made it overseas for a 16-date North American trek. Though they haven’t released any new material since 2008’s Third (aside from the brilliant single “Chase the Tear” back in ’09), nothing on the setlist – even the songs that are now almost two decades old – felt old in the least.

Opening every night of the tour with “Silence” off of Third and closing with “We Carry On”, a bleak, brooding highlight off of the same record, the band’s setlist dug into their hallowed back catalog to ensure that everyone went home happy. Barrow and Adrian Utley, masters of all things musical, are a huge part of that, playing an army of guitars, basses, synthesizers, and everything else necessary to bring the band’s tunes to life. Jim Barr on bass, John Baggott on keys, and frequent collaborator/drummer Clive Deamer – who looks to spend 2012 with Radiohead on their King of Limbs world trek as the band’s second drummer and Phil Selway’s mirror image – rounded out the six-man band. And of course, there’s Beth Gibbons’ voice, an instrument of peerless beauty in its own right, one somehow even more hauntingly siren-like than it is on record.

While we’re probably still a ways out from any new material from the group (they took 11 years to release Third), Portishead did well this year to cement their status as one of the best live acts of our time. -MÃ¶hammad Choudhery

Twenty years ago, the idea of seeing a hip-hop show at the United Center probably sounded ridiculous. Who would perform? Who carried enough energy to entertain that many people? Who even remotely had that power? Things have changed. In the past 10 years, hip-hop has become such an unnatural entity. Artists like Kanye West, Eminem, Jay-Z, and Lil Wayne have built up their brands similar to NBA all-stars. They’re legends with scorecards. In an era where albums bring in dollars and cents, these names turn a profit that rivals most entrepreneurs. Have you ever seen Scarface? That sort of excess is their lifestyle. What’s more, they’ve amassed legions of fans.

So, the idea of The Throne – Jay-Z and Kanye West’s long-hyped collaboration – could only fit in one place: stadiums and arenas nationwide. The event’s stage setup says it all: Over an empty stage, which features two raised platforms and a slew of digital screens, the two commercial and critical smashes do their “thing.” That’s all they need. The real appeal is seeing their dynamic collaboration in action. It’s a three-prong attack that starts with the excess and pizazz of “Otis”, continues with the rare introspection of “New Day”, and ends with the test of ego that comes with the multiple performances of “Niggas in Paris”. Between these three cuts are several Throne tracks and the rapper’s respective hits. It’s exhausting, it’s almost overload, but it’s a true example of how far this genre has come and how much further it will go. Because if there’s anything we’ve learned from history, it’s that there’s always someone waiting to take the throne. This won’t be the last time the United Center, or any venue like it, will host an event of this caliber. But, hey, every story needs a first page. -Michael Roffman

Even though I wish Malian desert blues emissaries Tinariwen received the same attention as the American musicians that inspire them, I appreciate the opportunity to see the band without 80,000 other people at a summer music festival. When they played Minneapolis for the second time this year, I jumped at the opportunity to see the band’s entrancing fusion of ancient Berber songs, guitar-driven assouf, and good old-fashioned rock and roll. And while the traditionally nomadic lifestyle of the Tuareg constantly changes the band’s lineup, Tinariwen’s particular incarnation at the Cedar Cultural Center performed so seamlessly it seemed like these musicians had been playing together for the full three decades. The rolling percussive rhythms, quick-fingered bass, and electrifying vocals affected and impressed me more than any other performance I’ve seen this year.

Bandleader Ibrahim Ag Alhabib, framed with the same wild hair as his icon Jimi Hendrix, commanded the attention of the audience with his gilded guitar and world-weary delivery. His and many members of Tinariwen’s participation in sub-Saharan conflicts influences the band’s songwriting, giving the Tamashek lyrics depth and heft that comes across, even though few, if any, audience members understood what he was singing about. After three encores—including a set with a shepherd’s flute and vocal harmonies that literally made my hair stand on end—I was happy I got to keep them to (almost) myself. -Harley Brown

At a tUnE-yArDs show, Merril Garbus starts many songs with a microphone in her left hand and a drumstick in her right. She bangs an odd beat on the snare while holding the microphone close. Then she moves on to the tom. Next comes the snare rim, or perhaps the mic stand. It’s stand-alone amazing when a song’s percussion track is conjured from this ritual, but one of my favorite moments at a show this year happened at Lincoln Hall, when she was making these loops and someone just screamed for her, letting out a yawp of excitement. The microphone picked up the scream as Garbus was recording her loops, and she smiled and said, “Well, now you’re really a part of this song.” We got to relive that moment again and again for the next five minutes.

I don’t doubt this happened at other tUnE-yArDs shows across the US this year, but it’s a good example of the kind of spontaneity born from the unadulterated joy that happens at her show. In all of the many shows I saw, no one smiled quite like Garbus. No one had the elation for the music and the audience like Garbus. No one made me happy — literally and simply happy — like Garbus. Her goofy, bubbly, and always confident demeanor excused the crowd to let go and engage more fully and personally with her and the music.

Garbus doesn’t strive for the cool and detached aesthetic. She strives for individualism and confidence in one’s own self. Cool it. It’s not as new agey as it seems. There are never any precious or pretentious moments at her shows, even with her face paint, tulle shoulder puffs, and semaphore gesticulations. All of it is supported in her stage persona and her music, both of which set new standards for performers and musicians alike. She’s our pop-poet laureate and my favorite live act of 2011. -Jeremy D. Larson