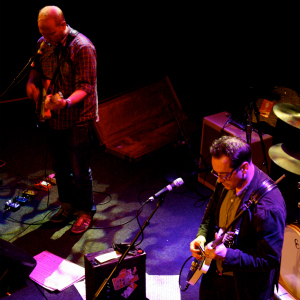 The Sea and Cake has been a pivotal influence to the indie alternative scene since they began creating music in 1994, as their subtle guitar riffs, lively drum beats, and emotional, poetic lyrics have become indicative of the genre. Building on the release of this year’s The Moonlight Butterfly, which is the band’s ninth album, The Sea and Cake played a full range of jewels from their catalogue, evidencing the best of their melodramatic indie and the depth of their wizened musical talent.

“Up on the North Shore” was one particular highlight. Given its surfer rock influences, and the amoeba-like lights rotating around the stage, the song retained this island flavor. “Midtown” continued the upbeat mood, with drummer John McEntire acting as the band’s heartbeat, or their motivator. Throughout the night, his face passed through 20 different emotions, from ecstasy to insanity, and he always sang along with singer Sam Prekop. “Inn Keeping” was another standout. The song’s beginning built slowly like an echoing of expectations; it was that wait for a call, a kiss, a moment of contemplation. The band ended their set after “Leeora”, but then returned for three more songs after a hearty call from the crowd for an encore.

Their entire set had this inherent fluidity, and the music was generally unassuming and neutral; the band members obviously revel in the beauty and enjoyment of musical creation, and they produce what’s good, what’s accessible, and what’s reliable. They’re an indie mainstay and originators of the genre simply because they have consecutively conceived the same sort of mellow music, time and time again. It’s music that doesn’t make you think or react, really — it’s just soothing. However, rather than being a deleterious quality, in the end it might actually be their point. Perhaps it isn’t so much about being avant-garde, but rather about reviving and restoring what’s good about the genre.

Setlist:
Weekend
On a Letter
The Staircase
Window Sills
Middlenight
Afternoon Speaker
Up on the North Shore
Midtown
Crossing Line
Exact to Me
A Fuller Moon
Jacking the Ball
Inn Keeping
The Argument
Leeora
Encore:
An Echo In
Lyric
Parasol