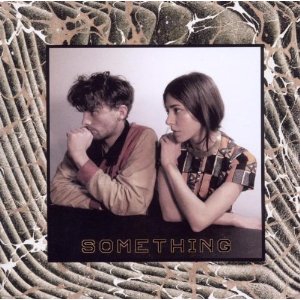 Even in this day and age where record labels matter less and less, it’s gotta be a tricky needle to thread when an indie act (Brooklyn synth-pop duo Charlift) signs to a major label (Columbia). Chairlift’s 2009 signing wasn’t followed immediately with any new music; instead, Something surfaced more than two years afterward. It seems like a major delay, but it also gave the duo optimal time to make a killer synth-pop genre piece.

Multi-instrumentalist Patrick Wimberly and singer/keyboardist Caroline Polachek are likely content with that. Chairlift’s presence in the music world since its 2008 debut Does You Inspire You has never been overly focused on image or hype, but intense artistry. Between its two records, Wimberly has been content acting as the “secret member” of Das Racist (according to his Twitter account), producing its Relax full length in 2011. Polachek has cut vocal features in recent years, including a deadpan performance on the rap act’s satirical “Fashion Party”.

Perhaps not coincidentally, Something’s “Take It Out on Me” shares a killer groove with “Fashion Party”. Count on Chairlift to repurpose a groove under something silly into something sexy, mysterious, and art-damaged. Something has plenty of joy, too. You can’t not smile at the chorus of “I Belong in Your Arms”, Chairlift’s version of a jaunty New Romantic ballad, all twinkling synth, clacking drum machine and lead bass. Lead single “Amanaemonesia” is the leanest, meanest song here, with a juggernaut hook and bass bending and popping over analog synth. It evokes a fitness-video backing track and the song’s video, featuring an interpretive dance performed by Polachek, plays oddly similar.

That dance visually represents a key element of what’s so charming about Chairlift, which Something wields effectively: the duo is truly unafraid to play an act straight-faced like it’s the most compelling thing in the world. Through its ridiculousness, it actually means what it’s saying.

“If I gave you what you were asking for/You wouldn’t want it anymore,” Polachek taunts at the end of “Guilty as Charged”, the final refrain of Something. No, boo, we beg to differ. Something is exactly what Chairlift fans asked for. Glad you took your time.

Essential Tracks: “Amanaemonesia”, “I Belong in Your Arms”