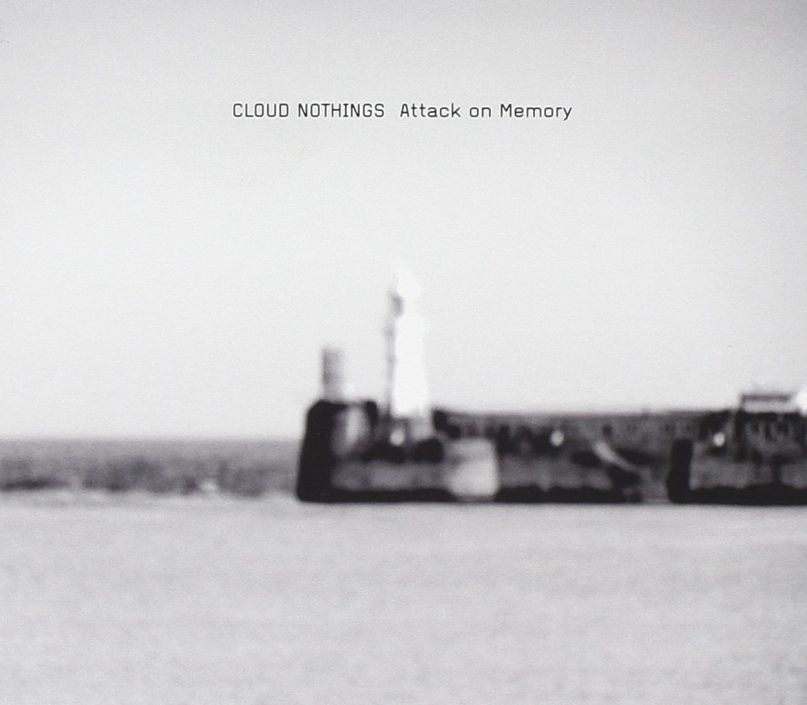 Some albums move you. Others push you to buy a guitar. Cloud Nothings‘ third LP, Attack on Memory, does both, acting as an aural assault on the heart and the fingers. Singer-songwriter Dylan Baldi vocally gnaws at the microphone, though only when he’s butchering his strings over his now trademark garage punk. Pegged as a lo-fi venture by critics everywhere, Cloud Nothings’ last two albums hinted at genius, though they never fully resolved the balance between grit and wit. In a way, the band’s name felt poetically accurate: They were there, but with what? Well, now they’re with a band, and producer Steve Albini doesn’t hurt, either.

Attack on Memory marks the first record Baldi hasn’t recorded on his own, and that’s apparent by its first track, “No Future No Past”. Any solid musician could multi-track a great song, but it’s hard to emulate chemistry. A piano, some drone-y harmonies, and solid percussion detonate together, but it’s the interaction between the two guitars. It feels real, and that’s because it is. As Baldi told us recently, “I felt like recording with a band just made more sense with this album just because we kinda wrote the songs together as a band.” That explains the following eight-minute suite, “Wasted Days”, a true testament that this project is no longer just a way to pass time for Baldi. For over five minutes, this song burns away at riffage and percussion that would satiate the sweatiest, concussion-prone metal fan yet garner respect from the likes of John Cale or Thurston Moore. When it retreats towards the end, you’ll be in your closet looking for those aging, mud-crusted Chucks of yours, convinced you’re 15 again.

But it’s not sophomoric in nature. Despite the vaguely emo lyricism – “I need time to stay useless”; “I miss you ’cause I like damage”; “No one knows our plans for us/We won’t last long” – Baldi hardly comes off as juvenile. He’s far too sincere and angst-driven, only it’s the “from-the-bowels” sort of angst that Hutch Harris trademarked with his Thermals outfit. On paper, a song like “Stay Useless” could be a throwaway Jimmy Eat World track, but its affronting levels, specifically Baldi’s vocal placement, retain just enough grit to sell you on the idea that this isn’t some manufactured, bullshit emotion. That’s Steve Albini’s work right there. The Chicago producer took this bedroom project of Baldi’s, booted the kid from the floor, and dragged his ass into a studio. He didn’t domesticate the noise; he gave it reason.

At eight tracks long, Attack on Memory echoes the sentiments of yesteryear’s greatest punk records. It’s awash in good vibes underneath bad distortion and Albini’s a primo candidate to knock that out of the park. Nirvana’s In Utero remains one of the most haunting efforts of its genre, but you’d never know. Why? Albini’s production supported the raw and live instrumentation that outweighed the dense lyricism. Admittedly, that sort of creative style can be rather obtrusive if handled improperly. For a veteran like Albini, it’s second nature now.

Baldi’s extended invitation to his touring bandmates and Albini’s “let’s do it” style of live recording not only make this album but the Cloud Nothings name itself. Keyword: band. With last year’s self-titled album, Baldi had his share of hooks and ideas, but altogether it felt too unfocused. He recycled harmonies, he relied on the scruff, and the songs pulled its punches. With Attack on Memory, Baldi’s never felt more alive or more authentic. On closing tracks “Our Plan” or “Cut You”, the band knocks out taut exercises in songwriting, taking what they’ve learned and pushing forward in signature style. Those aforementioned hooks and ideas? They’re fully realized, and that’s when things get dangerous – or, when guitar sales start to bloom. Either way, it’s another win in rock for Ohio.