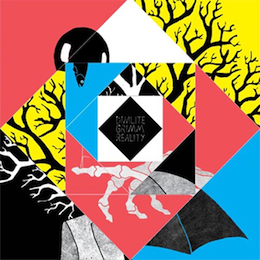 Everything you need to know about Grimm Reality is right in its cover art. Three interlocking images—a leafless tree sprouting out of a man’s head, a fish dropping out of an open umbrella, and a black balloon wrapped around an outstretched skeletal hand—represent wildly disparate ideas and styles forced together into a single composition. And that’s what Swiss producer Dimlite’s third album is, sonically—a mishmash of bugged out hip-hop, space funk, and psychedelic pop, genres in their own right, woven into one fascinating and deranged record for Egon’s Stones Throw sub-label Now-Again.

For the most part, Grimm Reality picks up where Dimlite’s first two releases for Now-Again left off, but this time, he’s chasing a more colorful and full sound. The album moves with such dizzying speed, twisting and turning constantly over the course of an hour, that it’s impossible to get bored; Dimlite never settles on a particular sound or style at any point, allowing songs to end at a very different place from where they started. The best example is “One of Uh Infinity’s Countless Uh Tiny Cycles”, which knits together synth drones, an unwavering drumbeat, whirling organs, and distorted bass and ends in a gorgeous string arrangement that has absolutely no connection to the four minutes that came before it. The song shouldn’t make sense, but somehow it does.

But Grimm Reality isn’t about throwing random clips into the air and watching where they fall; this is controlled madness at its very best. Like Egon, Dimlite seems to have a knack for digging up some of the most obscure and wonderful sounds and holding onto them until precisely the right moment, and then, and only then, he deploys them most expertly.