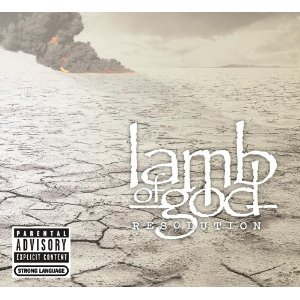 The ever-sturdy Virginia metal ensemble known as Lamb Of God can boldly boast many things: a mastery of the craft, longtime dedication to fans and country, a line-up with immense staying power, not to mention sheer brutality on any given stage or speaker. Where 2009’s Wrath took on production value akin to late-era nu-metal, Resolution feels more organic. There are no concepts, no gimmicks, no frills: just straightforward metal, period.

Introductory “Straight For The Sun” chugs along from a deep inhale by vocalist Randy Blythe, who soon slaughters every preconceived notion brought on by “Set To Fail”. “Desolation” shows off the Adler siblings at guitar and drum kit, mutilating your musical landscape in much hastier time. Lead single “Ghost Walking” kicks off shortly thereafter, resembling KMFDM’s “WWIII” on the outset, later replete with a metric ton of speedy riffs for your eardrums which segue into the equally devastating “Guilty”.

Our word of the day is “relentless.” Everything about Resolution is precisely this: an unfettered abuse to the head and headphones. Lamb Of God incorporates new ways to spell out old ideas (“Invictus”, “Visitation”), they teach old dogs new tricks (“The Number Six”, “Barbaraosa”), and they include a good ol’ fashioned — almost European — epic closing scene, snarkily named “King Me”.

Truth is, if any band has a right to dub its album Resolution, it’s the always determined and periodically original Lamb Of God. Fans can only hope that 2012 does not prove to be the band’s ultimate end, and judging by the success of “Ghost Walking”, they may not have to worry much. Book-ended by what Eddie Vedder might call “a breath and a scream,” here’s to the new year, and here is our Resolution. Horns up.