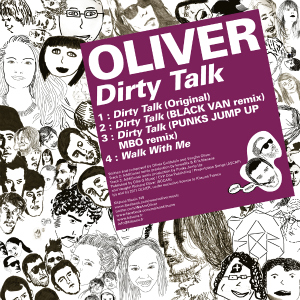 The original mix of the opener shows LA native Oliver Goldstein and Vancouver native Vaughn Oliver blending their propensities for slinking funk and broad disco together. Rapid, chopped-up synth chords fly over the bold, steady beat, falling in and out, leaving room for the breathy vocals and swelling anticipation. The whole song is shrewd and well thought-out, and as the capitals in their name suggest, Oliver enjoys making big-sounding music. The Punks Jump Up remix of the same song brings a welcome reprisal of the original’s chords over an upwards-barreling, late-’80s bass – sirens, chimes, zipping beeps, and more dynamic vocal samples lead to an even busier sound collage than the opener.

Unfortunately, not all riffs on a theme are good riffs, and Black Van’s take on the song, sandwiched between the two superior mixes, falls a bit flat. We can only hear the “Whisper in my ear” sample so many times before things get a bit silly. At least the minor-key piano hits provide a romantic, finding-love-in-the-club distinction from the other futuristic, robo-rave sounds, but it’s the latter category Oliver seems to work well in. And for all those moments the duo have flirted with disco in their Aeroplane and Britney Spears remixes, they fully embrace their inner KC & The Sunshine Band groove on the only other original track, “Walk With Me”, shouted synths and obligatory disco guitar all accounted for.

Let’s see the disco lovers branch out a little more and get gritty.