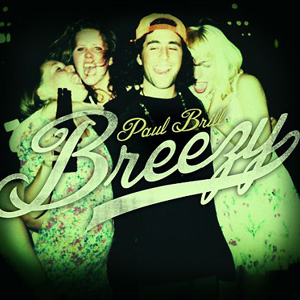 Paul Brill is, in simple terms, a Renaissance man. With stints as a musician, songwriter, composer, herbal smokes salesman, valet, and marine biology instructor, well-rounded is an understatement. But the bulk of Brill’s background is in composition and soundtracking. He has scored multiple award-winning film and television programs, (Joan Rivers: A Piece of Work, Freakonomics) many of which have been nominated for Emmys.

That’s why it’s so surprising that, in contrast with his serene, more minimal and desolate film compositions, Brill’s original songs on Breezy are largely light-hearted, barely-experimental, upbeat pop songs. Think the New Pornographers meets Badly Drawn Boy meets Big Star meets Matt Costa. The whole thing stays pretty true to its title, without being lame, sappy, or overly derivative, which is actually a pretty difficult feat. And despite a bland, laid-back title by no way is he Jack Johnson-ing it. This stuff is pretty un-boring.

But there’s one influence in particular that’s more present than any else: Jeff Tweedy. In reality, a good number of these songs could just maybe pass for Wilco songs. Take opener “Sunny Guy”, which resembles “Standing O” from last year’s The Whole Love. The record’s pedal-steel wielding title track  is also clearly indebted to Chilton and Tweedy, with a bit of a slow-churning alt-folk vibe. It’s one of the few somber-ish tracks here, a cogitation on the unachievable idyll of a relaxed, healthy relationship.”Sometimes lies become undressed,” he wisps.

That being said, it’s also pretty eclectic; from the “Smooth”-by-Santana-and-Rob-Thomas-done-right salsa-rocker, “How High The Fishes”, to the echoing chimes of the choral, male-female duet “One Channel Show”–probably the best song on the record. “I know there’s more than one channel show, and you know it’s never on,” the two sing in cryptic harmony.

Brill’s music is an important reminder that there’s still a demand for quality, classic pop music as long as it’s done right and with the passion, care, and strange wordplay exhibited here.