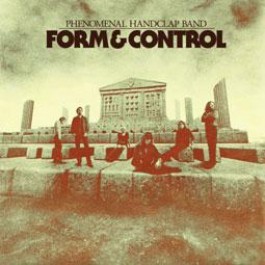 In 2009, the Phenomenal Handclap Band debuted with an album of nostalgic grooves that felt like opening up the trunk of your cool uncle’s Mustang to find a bewildering array of funk and soul vinyls. The New York-based group’s self-titled album had guest spots from members of TV on the Radio, the Jon Spencer Blues Explosion, and The Dap-Kings to back them up. After a tour with Bryan Ferry and a Diane Birch-assisted covers EP, the Phenomenal Handclap Band return with its sophomore release, Form & Control, which feels more centered, yet as retro as ever.

Over a disco-infused bass line and the twitch of a conga, a female singer repeatedly croons, “Come and join us!” on opening track “Following”. It’s a buoyant delivery that encompasses the appeal of a decade re-examined through the tint of retro-hipness. Even more upbeat is the song “Give”, which is powered by a hip-swiveling beat, as male and female vocals swirl airily above.

However, that kind of openness and looseness disappears when they take on something other than a dance anthem. The rigid rock of “The Unknown Faces at Father James Park” sounds like anonymous emotionlessness thanks to the ensemble’s mixed voices. The Phenomenal Handclap Band are talented players, but it comes off as almost too technical and formulated. Meanwhile, the vocals, even on New Wave-influenced songs like “Shake” (the refrain of which is “Oh-way-oh-way-oh-way!”), have a restrained pitch to them that doesn’t invite much room for feelings.

While the grooves remain, one is left wondering if this kind of psych-disco infusion will last much longer. There’s no doubt the Phenomenal Handclap Band provide a fun and uplifting listen. Synths, spot-on drumming, congas, piano solos, and harder guitar riffs are plenty to enliven the record. While they’ve grown perhaps too tight as a band–or they’re just that good at molding themselves into personas–they’ve achieved a balance on Form & Control that wasn’t yet established on their debut album.

Essential Tracks: “Following”, “Give”, and “All Cliches”