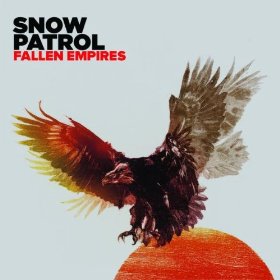 Prior to the release of Fallen Empires, the sixth album from Snow Patrol, the band asked fans to “keep an open mind” to the new sonic direction of their music. Whenever a group makes such a statement, it usually means things won’t be that different. Sure, there may be some “electronic” influences or “darker” lyrics, but musicians that truly revamp themselves rarely say anything about it until after the album is released (see: Radiohead) and even then they’re usually mum on the subject (see: Destroyer). Fallen Empires does contain some techno elements, but at the end of the day, Snow Patrol remains Snow Patrol.

Take “The Symphony”, for example. The song is laced with dreamy keyboards, but strip them away and you’re left with a gradually crescendoing chord progression, unwaveringly melancholy vocals, and vague lyrics that would have easily fit in anywhere on The Final Straw and A Hundred Million Suns. It actually would have been nice to see the band further embrace their new-found love for the heavier side of electronica, an aesthetic that rears its toothsome head on the first half of the album, then peters out.

Opener “I’ll Never Let Go” buries everything in throbbing toms and spacy effects before giving away to an explosion of distorted crunch and thrilling backing vocals from famed gospel singer Merry Clayton. “Called Out In The Dark” has a nice tinge of disco and the ethereal momentum of “The Weight Of Love” possesses a heaviness akin to Muse. After that, it’s business as usual. While nearly all the latter half tracks contain an echo of dancefloor spirit, it’s typically placed in the backseat in favor of maudlin strings (“Lifening”), dreary piano (“New York”), and an emphasis on frontman Gary Lightbody’s heart-on-sleeve lyrics.

The words in the record’s first half are no different but are at least buried in the band’s more risky musical detours, whereas the latter half’s more straightforward tunes allow sentiments such as “Have we lost the magic that we once had?” and “We are the light” to shine in all their unspecified glory. Keyboard effects aside, it’s the same-old same-old, and whether you love Snow Patrol or hate ’em, Fallen Empires will do little to change your mind.

Essential Tracks: “Called Out In The Dark”