The Babies – Cry Along with the Babies EP 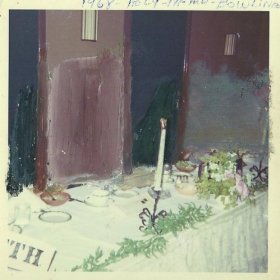 None of the six tracks on this EP from The Babies, the Woods/Vivian Girls side project, feel like a complete thought, and certainly none of them resemble anything ready to press. But then again, that’s always kind of been Kevin Morby (Woods) and Cassie Ramone’s (Vivian Girls) M.O., both with their main gigs as well as–and even more so–with this project. Last year’s self-titled debut was an uneven collection of rootsy, lo-fi indie rock that made equally strong cases for and against this partnership of Brooklyn rock royals. And unfortunately, Cry Along with the Babies doesn’t make it any easier to choose a side.

Opener “Big Mercedes” is what this band does best. Simple, love-weary lyrics with Morby and Ramone playing off each other vocally, all laid over strummed chords and a tinny guitar line. Neither of them are particularly strong singers, but together they bring out an element of sweetness and charm that makes up for a lack of technical proficiency. Anyway, if you were looking for technical proficiency, you wouldn’t be listening to The Babies in the first place.

“Trouble” is another successful take on the duet as Ramone talk-sings a tale about a troubled girl, and Morby takes the refrain, “Here comes trouble from far away.” Morby’s “My Tears”, however, sounds very much like it was made up on the spot and not in the good way. “More Stage” is the extended player’s best song, with Morby handling all vocal duties on the darkly life-assessing but catchy tune, later joined by Ramone on his final plea for his girl to “stay on my team.”

“Hey Mama” and “That Boy” are nice efforts as well, but there is an overwhelming sense of awareness, after listening to these six songs in succession, that there is little that differentiates one from the next, both in terms of style and quality. The music is very much in the early stages of development, and while it again hints that the members of The Babies might be on to something special, it also indicates that they haven’t figured out what that something is.