The Little Willies – For the Good Times 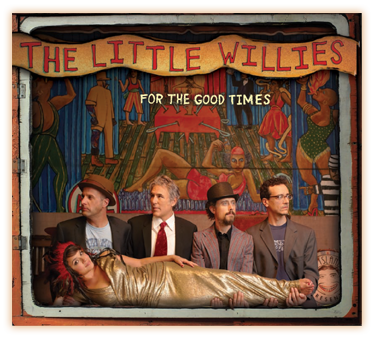 NYC country folk collective The Little Willies have seen six years between the release of their debut and their latest album, For the Good Times. Still nursing a knack for twangy Americana, the group sounds more refreshed, energetic, and jazzier. With Norah Jones on keys, occasionally trading vocals with Richard Julian, the group’s breezy, swing-heavy sound is equal parts honky tonk and hopping jazz club.

Each member of The Little Willies has his or her own solid musical identity outside of the group, but together they’re a powerhouse. For the Good Times is a covers record, sampling some legendary tracks from the country cannon, including Dolly Parton, Johnny Cash, and Kris Kristofferson, and these musicians give everything a fresh, breezy jazz tone much like that of Jones’ early work. The group’s adoration and close study of these staples occasionally alters or outstrips the power of the original, an important feat in a cover album. Their take on Loretta Lynn’s “Fist City” fails to channel the fury of the original, but takes a steadier, more lamenting approach. Lynn’s original is feisty and cute, while The Little Willies make it mournful, with just enough rhythm to keep you engaged. The title track is an endearing take on the Kristofferson original, mirroring their sweetly haunting version of “Jolene” that serves as the album’s curtain call.

Instrumental “Tommy Rockwood” is the only original track on the album, written by guitarist Jim Campilongo as the result of hours-long walks around New York City to kick his smoking habit. The distraction tactic clearly worked, as the whimsy shines in the tumbleweed, much like their idols. A well-crafted nod, For the Good Times finds the Little Willies showcasing their favorite pastime—giddily playing standards with their bandmates. Equal parts good time and fresh, original takes on these classic tracks, the band offers a medley of styles that color these standards in a new light.