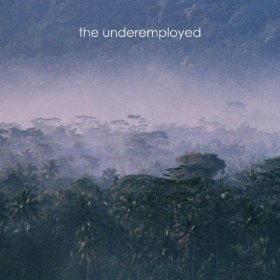 The energetic debut EP from Parisian band The Underemployed, Fuselage, serves double-duty as both a kind of joyful “Hello, world!” greeting and a calculated bid for listeners’ undivided attention. Band members Adrien, Nicolas, and Pierre (all three like to keep their surnames under wraps) have clearly been honing their craft for some time. Their self-proclaimed underemployment seems to have been fruitful, allowing them the freedom and free time to craft a distinctive and practiced sound that any rookie band would covet.

These three young bucks seem eager to distance themselves from any influences, creating a largely smooth electronic sound that does succeed in forging some new ground. They’re not completely scot-free, though. “Uncle Feel” is a brash, brave mix of funk and bizzarro rock, drawing comparisons to such hard-to-classify groups as Australian electronic band The Avalanches. “If I had a Cockney accent, it would serve me good in bars,” Nicolas tells us amid the twanging bass line and crisp drumbeat, and we can’t quite be sure what this means (For getting drinks? For getting chicks? For singing karaoke?), but we believe that he believes it.

“Uncle Feel” is a standout track for its unique vibe and unusual lyrics and vocals, but also because it is sandwiched between two lush, almost devastatingly melodic and ethereal songs that are sonically similar to the rest of the album: the opener, “Cardboard”, and “Ten”. One layers an addictive beat under synth and rain-like sound effects, while the other features soft-spoken vocals and a heavy sense of melancholy. All three are compelling in their own way, but the upbeat funk of “Uncle Feel” ultimately lacks cohesion with much of the EP’s more melodic material, and this is a hard thing for a listener to overcome. In the future, The Underemployed may have a genre choice to make if they want to earn fan loyalty.

The Underemployed are still largely obscure and mysterious, with little information available about them. One can only assume from listening, though, that Radiohead has had no small role in their musical development. The two closing tracks, “Confusion” and “Fuselage”, showcase a mature sense of reigned-in sensibility, as well as beats and melodies that Thom Yorke will probably wish he had thought of himself.

Despite the discrepancy of “Uncle Feel”, Fuselage is an album to sample and savor. With an EP this polished, it’s hard not to anticipate what they will do with the space afforded by a full-length album. This band may be young, but they sure don’t sound like it.