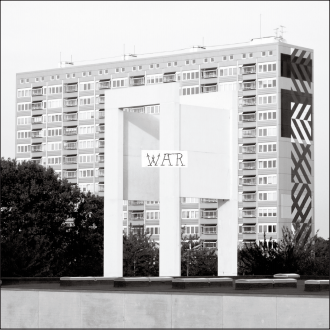 Copenhagen, Denmark may be known for The Little Mermaid and greening efforts, but it also boasts one of Europes richest punk scenes. Its from this City of Spires that last years breakout band of young hooligans Iceage was birthed, and now frontman Elias Bender RÃ¸nnenfelt is bringing us his newest side-project.

Another Copenhagen punk-stalwart, Sexdrome singer and label Posh Isolation co-runner Loke Rahbek, joined RÃ¸nnenfelt to form War. Originally recorded on four-track cassette last year, the duos debut single will be released on February 21st via Brooklyns own Sacred Bones. The 7 consists of title track At War for Youth and Kains MÃ¦rke on side A, The B-side, Brodermordet, is available in all its scuzzy glory below. A blown-out wall of sound, the track alludes to the Biblical fratricide (brother slaying) of Cain and Abel.

A press release calls At War for Youth, “a compelling and utterly unique new genre, pulling elements as abstract as lo-fi post-apocalyptic punk dirge and early Chicago house music.” Those sounds are certainly recognizable in the track above, so be sure to grab the 7″ when it drops February 21st on Sacred Bones. The tracklist is below.