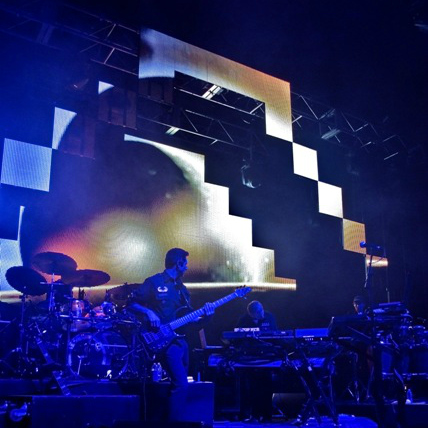 STS9 (Sound Tribe Sector 9) has now been on a journey of both miles and musicianship for over a decade. Formed near Atlanta, GA, the five-piece jamtronica outfit has performed for countless fans across the globe, but the gentlemen have always had even higher expectations for their progressive electronic jams. STS9’s current Great Cycles Spectacles showcases the band’s longtime fascination with time and space, combining an overwhelming visual experience with already visceral aural explorations.

Prior to the activation of STS9’s new setup, DJ-extraordinaire RJD2 hit the stage of Chicago’s Congress Theater, equipped with four-turntables and two massive stacks of vinyl. For those that arrived early enough, and beat the snow pummeling Chicago outside, RJ delivered his most recognizable track A Beautiful Mine, which accompanies the opening credits of Mad Men. With only an hour to perform, RJ was continuously dropping new vinyl, working the mixer without hesitation, or making his way between turntables. Like all RJD2 performances, those standing close enough could see the focus, and intensity, in his eyes as he stared down to manipulate the decks. RJ took full advantage of the four decks, developing layers across genres, and almost simultaneously scratched three decks to affect the entire groove. To close the set, RJ de-sleeved live favorite Good Times Roll.

There was no doubt when STS9 was ready, the stage went through an Activation. The message was lengthy, but in essence, this concert was to be a message for an alien nation possibly a billion light years away, and was a gift of music to whomever accepted the transmission. From there, STS9 set course for a nearly three hour journey that encompassed their many musical incarnations. This journey was enhanced by an LED pyramid, moving glyphs, and a series of visual cues developed in conjunction with Saxton Waller. The entire audience felt part of this Interplanetary Escape Vehicle when David Murphy slapped the first few bass-tones of Moon Socket. The mysterious aura intensified during the slow-build of Ad Explorata‘s Central, which flowed seamlessly into Tooth.

The night’s best run came near the end of the first set, when STS9 followed the new dance-friendly When The Dust Settles with the chill, and unexpected, series of Today, Common Objects Strangely Placed, and 986 Foot Tall Trees. The performance of the latter was reminiscent of the acoustic Axe The Cables tour – Murphy and Hunter Brown seated facing one another, with just minor accompaniment by the dual-percussionists and keyboardist David Phipps. The beauty of the number carried through until the end of the set, when Phipps was left alone on stage for a masterful piano solo.

The intensity was magnified for the second set, which opened with the thumping bass of Scheme (Reprise) and continued into Metameme with its spine tingling use of echoed synths and chimes. Shortly after, the band funkified their improvisations through Inspire Strikes Back, and closed with the live mainstay The Unquestionable Supremacy of Nature.

Night one of the Tribe’s two-night Chicago stint ended with a driving rendition of Lo Swagga into the other-wordly tribal psyche elements of EHM. As the members exited the stage, our interplanetary guide thanked the audience for coming, and reminded us that we are all part of the same collective, and that peace and love should be shared between everyone.

The setlist can be found below, with a soundbooth stream available soon via STS9.com.