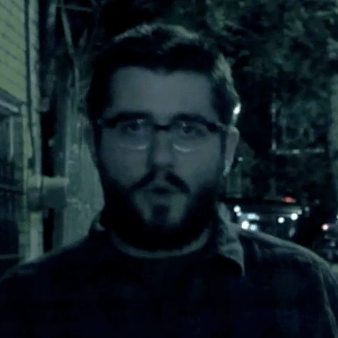 Gusting forth on the winds from Chicago, Into It. Over It. struck many a chord last fall with their debut record, Proper. Evan Weiss, the man behind the moniker, imbued his brand of emotional pop-punk with an indie mentality and indefatigable energy, a refreshing exercise in an oft-marginalized genre. His sincere lack of pretense in his lyricism, a skill honed over his well-cited 52 Weeks project, is part of Weiss appeal, and its an atheistic hes carried over into video.

One of the slower, more intimate moments on Proper, No Good Before Noon is given an equally stripped down video. Directed by Jordan Welker, the clip features no more than Weiss himself walking down an empty city street at night. Though occasionally accosted by silent pedestrians in need of a lighter or quick game of rock-paper-scissors, Weiss keeps his eyes locked on the camera, keeping those personal words aimed straight at you. Check out the video below.

Into It. Over It.s Proper debut garnered such attention that Weiss has been on the road with this years incarnation of the Wheres The Band? Tour, showcasing frontmen from pop-punk and emo heavyweights in solo performances. The lineup includes Chris Conely of Saves The Day,  Matt Pryor of The Get Up Kids, Anthony Raneri of Bayside, and Ace Enders of The Early November. Into It. Over It. will follow the tour by joining the Glamour Kills Clothing Tour in March along with other modern torch-bearers of the genre. See both tour itineraries below.