Video: The Flaming Lips w/ Nels Cline cover The Beatles’ “I Want You (She’s So Heavy)” 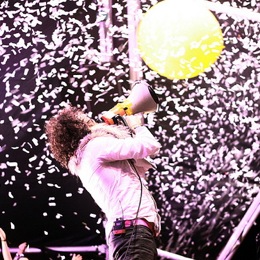 Aside from collaborating with everyone on god’s green earth, The Flaming Lips’ other current fascination appears to be covering The Beatles. We’ve already witnessed Wayne Coyne and co’s tripped out version of “I Am The Walrus”, and now Hidden Track points us to pro-shot footage of the band’s recent New Year’s Eve show in Oklahoma City, where they teamed up with Wilco’s Nels Cline for a 17-minute rendition of “I Want You (She’s So Heavy)”. Watch it below.

In other Lips news, the band is continuing to work on their collaborative album, tentatively due out on Record Store Day 2012 (April 21st). As Pitchfork points out, snippets of their efforts with Bon Iver and Erykah Badu have hit the web, and you can check ’em out below, as well. They’ve also been “working” with Ke$ha.