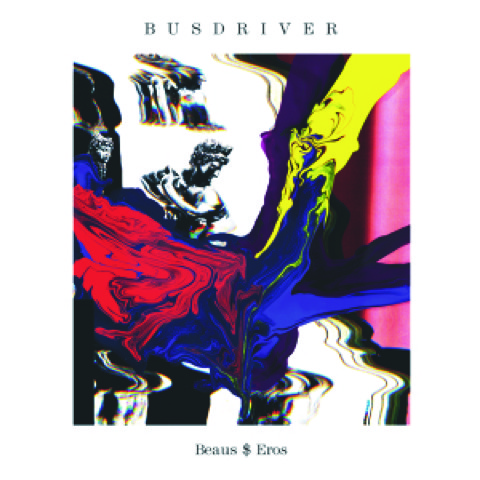 L.A. rapper Regan Farquhar, better known as Busdriver, is one of the busier and weirder dudes in the business. Whether it’s featuring on tracks ranging from electro-heads Modeselektor to’90s West coasters Freestyle Project, starting new projects, or releasing odd one-offs with indie rockers Deerhoof, the dude seems pretty eager to keep his schedule full. And whenever one of those frequent albums drops, you know it’s going to be full of unusual, sometimes off-putting, punny titles, like “Computer Cooties” (off of the album of the same name) and “Unsafe Sextet” (from 2009’s Jhelli Beam).

Beaus$Eros plays in that same tradition, the look of the title demanding that dollar sign be an ampersand, Busdriver chuckling because it just isn’t. His insistence on frustrating and playing with expectations is often downright funny, if not antagonistic. Where Childish Gambino’s “Bonfire” took over last year with its rough-hewn insistence, the candy-coated, sing-song cuteness of “Bon Bon Fire” is the smirking, fun-house response. A line like “I appeal to folks that you can’t by acting awkward” on that track, or “Me and Medgar Evers and Arthur Ashe in the conference room/We’re picking band names” could each embody Busdriver’s ethos for the new listener.

The production on the album is a very wide spectrum that still manages to feel cohesive. Opener “Utilitarian Uses of Love” borders on trippy Animal Collective territory, and electro-head rush “Kiss Me Back To Life” is incredibly different sonically, but a fun-loving, free-wheeling, psychedelic spaciness overrides any difference.

The off-kilter, eccentric mind of Busdriver unfurls (as it always seems to) in an engaging, surprising way. “You Ain’t OG” sounds like it could be a TV On the Radio hip hop ballad, while the track that immediately follows it, “NoBlacksNoJewsNoAsians”, filters a rapidfire spray of disjointed, dystopic imagery along with a big brother voice insisting that silence is golden. The two tracks couldn’t be more different (the former direct, largely sung, and smooth, while the latter is scattered, rhymed hard, and sharp as a knife), yet they fit organically in the esoteric, exciting world of Busdriver.