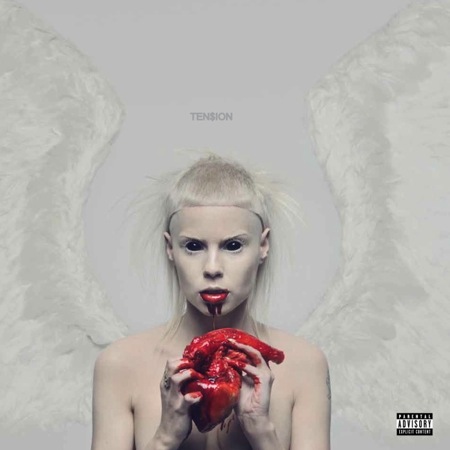 When the announcement arrived that South Africa’s rave-rap collective Die Antwoord were leaving Interscope Records, due to conflicts in creative control, it was an early indicator that their sophomore full-length, Ten$ion, would have all the same vulgarity, filth, and Zef-side as the trio’s successful debut, $o$.  The move also reinforced Ninja and Yo-Landi Vi$$er’s “Full Flex” mentality, but after multiple listens to the 36-minute Zef experiment, it seems the album could have benefited from some artistic restraint.

Tracks like “I Fink You Freeky” and “Hey Sexy” each showcase DJ Hi-Tek’s electro-glitch production skills and Yo-Landi’s piercing vocal delivery, but they’re bogged down by rogue choruses and abrupt tempo changes. The album’s three tracks that clock in under a minute and a half similarly distract from the flow, feeling better suited as B-sides (as in the case of the disturbing “Uncle Jimmy”), or ripped of their beats to develop an additional single (the bouncing bass and vocal-sample “Zefside Zol – Interlude” seems a perfect candidate).

Production similarities between $O$ and Ten$ion continue to surface after multiple listens. The punching synths of “I Fink You Freeky” are only slightly edited from the extended run to close “Wat Kyk Jy” off of the earlier record, and the build of “Fatty Boom Boom” is reminiscent of “Beat Boy”, though the former demonstrates DJ Hi-Tek’s progressive love for sub-bass.

The album is partially redeemed with the band’s ability to humorously embed re-interpretations of [once] popular lyrics into their beats. On “Fatty Boom Boom”, Ninja takes a stab at Vanilla Ice, disclaiming “now I do not want to stop, collaborate, or listen,” with Yo-landi then bringing back Eminem’s “Hi, my name is” for her own personal shout out. The most profane track, “DJ Hi-Tek Rulez”, arrives courtesy of a controversial Mike Tyson interview. And, of course, the album wouldn’t be complete without a few words reserved for Interscope on “Folk Julle Naaiers”: “Motherf**kers tell me to slow my roll, but sorry no can do?/My style is so brand new, I try to make [you] understand it.” Despite more of the foul-mouthed impish fun, Ten$ion doesn’t offer much punch or cohesive power.