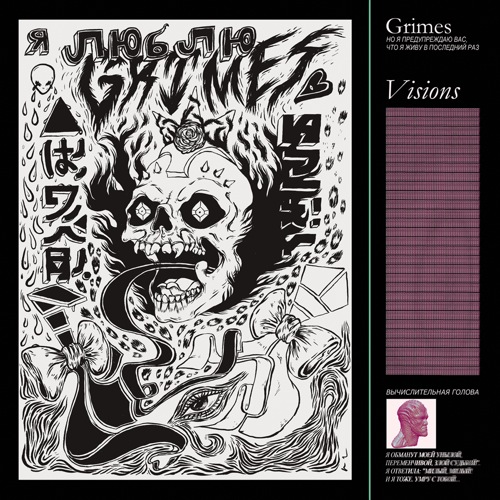 Among the rest of 4AD’s increasingly divergent recent acquisitions (tUnE-yArDs, Beirut, and Zomby among them), Claire Boucher–who’s been steadily releasing music from her bedroom as Grimes for the past two years–sticks out like a sore thumb; she’s actually a perfect fit for the label’s famously shoegaze-y pedigree. Boucher’s striking falsetto, and the billowing reverb/delay she covers it in for nearly all of Visions, could easily pass as any number of the hallowed names in their catalog, but it falls closest to that of Liz Fraser, the impressionistic singer for 4AD’s former flagship act, the Cocteau Twins.

A faint vocal likeness to Fraser is about as derivative as Visions ever gets, though. Boucher’s sound is described most accurately by the half-ridiculous “post-internet” tag she jokingly applied to it in early interviews. The album often plays like a meticulously crafted collage of divergent musical conventions, though Boucher seems more interested in the utility of her various influences than in namedropping them. Each of the LP’s 10 songs are crammed full of disparate ideas and compounded genres, layers of vocal harmonies, chiming gamelan, and a Mozart sample (on the aptly titled “Nightmusic”) all splitting time with driving Europop and bits of chipped IDM (“Genesis”).

On album highlight “Skin”, Boucher stretches her vision to its limits, morphing repeatedly and without warning for six minutes with little more than a rigid backbeat and soft Wurlitzer keys as a framework. Though it’s her fourth album since 2010, Visions sounds very much like a debut effort in its willfully unpredictable (though hardly uncertain) nature, which can be read either as brilliantly capricious or frustratingly fickle.

However you cut it, Visions is a remarkable outing for Boucher in that it manages to showcase her knack for spinning bits and pieces from all points on the musical spectrum into crafty, easily digestible pop.