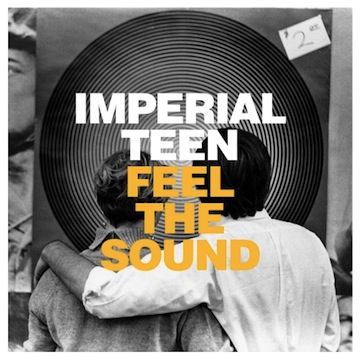 Even in their 16th year as a group, Imperial Teen continues to prove their staying power. Allowing lengthy periods to pass between releases, Feel the Sound is only the fifth album to join the foursome’s previously well received catalog. Even though five years have elapsed since their last release, this album emerges as some of their most memorable indie pop to date.

Despite the delay, Imperial Teen returns to each recording with the same impeccable understanding of their music. Feel the Sound employs the same youthful exuberance their catalog is noted for, the sugary harmonies as hard to resist as ever. The proper kickoff to end the hiatus, opener “Runaway” shines with shared lead vocals that bait listeners into a whirlwind of  steady drums and keys that sound plucked from an earlier era. The energizing vocals are swapped between the two male and two female members of the group effortlessly, crafting choruses that are difficult to forget. Such is the case for the waltzing vocals on “Last to Know”, which expand drastically, their echoes darting among an uprising of guitar and drums.

Feel the Sound welcomes listeners back into the sunny world of Imperial Teen that they didn’t even realize they were missing. “Out From Inside” would be perfect to soundtrack a beach party, pouty vocals and the shimmer of guitar foreshadowing a surprise ending of distorted keyboard. Even when the group scales down, a whimsical pop nature remains intact. “Overtaken” is a striking closer, led by tragic keys and warped vocals that match the peculiar pop nature of Mates of States. Imperial Teen have regularly delighted fans with their recorded material’s impish tendencies, and Feel the Sound is no exception.

Essential Tracks: “Runaway” , “Last to Know” , and “Out From Inside”