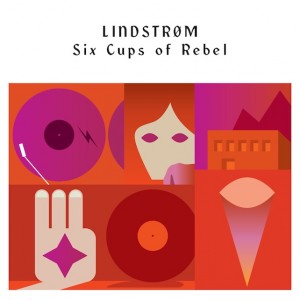 Bursting onto the Norwegian scene in 2002 with his own record label, Feedelity, LindstrÃ¸m has since composed a steady stream of stylistically funky, bass-heavy mixes. His latest effort, Six Cups of Rebel, represents a divergence from the dreaminess of the old (i.e. 2006’s It’s a Feedelity Affair), and is a curt but exploratory vision into the mind of a musical pioneer.

Instantly fervent and imaginary, the album’s first track, “No Release”, features rapid organ successions paired with a building background synth. It’s an epic entry — an introduction to the energy the album intends to bring. “De Javu” kicks off on the same high note, juxtaposing the classical tones of “No Release” with its own jumbled electronica. The mood misses, however; the track is undeveloped, never seeming to transgress its own odd warblings to any real drop or climax.

Likewise, “Magik” is a high-strung mess, following trajectories in every direction but never really coming to a well-rounded conclusion. Its absentmindedness aside, even the quality and scope of its sounds are syncopated and unpleasant to the ear. “Quiet Place to Live” seems to be inspired by Justice’s Audio, Video, Disco, incorporating a hard rock sound to create a tougher grit and grime. The track’s only forgiving moment is when it mixes undulating synth during the chorus; but even then, the lackluster attempt LindstrÃ¸m has given this newest sound is all too apparent and inbred.

“Call Me Anytime” and “Six Clubs of Rebel” continue the trend, thoroughly over-reaching and over-articulating; in the most succinct terms, they both sound like a bad acid trip. “Six Cups of Rebel” does have a little more organization, even if at times it teeters again into random ramblings, and the album’s final track, “Hina”, again leaves the listener suspended in a confused whir of musical weaponry.

After a thorough listen, the only prospect is this: Given the title of the album, LindstrÃ¸m has deliberately delivered something avant-garde and nerve-racking in an overt attempt at musical rebellion. This may be an idealist assumption, one solely garnered from the artist’s otherwise impeccably brewed mixes of the past, but it would explain the superficial lack of organization and purpose that condemn this latest effort.

Essential Tracks: “No Release” and “Six Cups of Rebel”