Perfume Genius – Put Your Back N 2 It 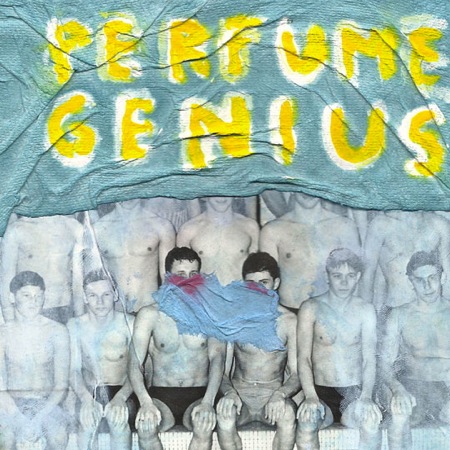 The first sound heard on Put Your Back N 2 It is Mike Hadreas taking a deep, stilted breath. It’s the kind of breath heard before confessionals and admissions, one last inhalation and exhalation before some serious truth is dropped. Hadreas, as Perfume Genius, has previously served heaping portions of truth with little to no sugar to help them go down — which is still one of his strengths. He’s one of the few male singers today who wears his fragility and sexuality on his sleeve while striking a delicate balance so as not to drown us all in melodrama and schmaltz. It was easier to have a direct current to Hadreas in his debut Learning due to its lo-fi, copy-of-a-copy sound. But Hadreas, now with unfettered access to a studio, makes the best of his surroundings to bolster his raw emotions with affecting arrangements that have so much gravity that you can’t help but drift into his orbit.

The Matador Blog posted Hadreas’ own breakdowns of each track, which is in complete consonance with the honesty happening on Put Your Back N 2 It. It’s not too often that a musician will offer detailed descriptions of their work, but it’s the first inkling that Hadreas prefers to soften the blow of his album this time around and take some of the pressure off of his bare-boned ballads. The descriptions temper the tracks, ground them in some sort of reality when they are too painful or lift off in to the surreal. Hadraes writes this of the song “17”:

“Almost every gay man I have met has body image issues. They are all tripping! I think it is an easy place for your brain to dump everything. A lot of times you have no idea why you feel so shitty, so you can pick at your face. I named it 17 because of teenagers, who are always tripping and killing themselves. It is basically a gay suicide letter, so…sorry about that. But I was not always interested in listening to anything triumphant when I was a teenager, or even that it gets better. I think that is really valuable but sometimes I wanted to hear that someone felt exactly as grim and bleak as I did, and have it written out for me. That is important too, and not an invitation.”

As far as songs-as-suicide-notes go, it’s not a track you can really nod your head to. When he sings, “string it up on a fence/cover it with semen/I am done, I am done with it,” it’s hard to erase the afterimage of those lyrics on the back of the eyelids when they close. Even though Hadreas is somewhat jocular in these descriptions, there are exactly zero moments of thematic reprieve or levity on this album. It is an assault on not only the emotions, but on the status quo of pop music in general.

The themes on Put Your Back N 2 It, particularly the queer ones, are a bit of a separate conversation than the actual music on the record, but it’s worth mentioning because it’s what separates Hadreas from many contemporary singer-songwriters. “Brave” is a word that’s often used sardonically (“Oh, how very brave of you”), but it’s hard not to give Hadreas points for wrestling with such private, socially taboo issues. It of course helps that Hadreas has a fantastic ear for melody and pen for poetry, but for a pop song to be about the mechanics of gay sex and trying to find the tenderness in it is a categorically brave thing to do.

What’s most wonderful about this album is the work done on the arrangements in the studio. It’s a fleshy album (in many senses), and every time Hadreas tip-toes away from maudlin piano-ballads and towards Xiu Xiu‘s experimental side of the spectrum, the album really lights up. The disconcerting pitch-shifted voice that parallels Hadreas’ on “No Tear”, the creeping feedback in “17”, the thick film covering “Floating Spit”, even the seven seconds of abrasive noise as the end of “AWOL Marine” could have lasted for another seven minutes (someone hand Hadreas a Merzbow CD!). Perfume Genius’ strengths are emoting on a lyrical and vocal level, but when that’s only supported by a rudimentary piano melody, things start to flatten out, especially considering the pristine fidelity of the mix on this album.

All the pallor and drama of the album is eclipsed by Hadreas’ desire to comfort the nameless faces who know his pain. He much prefers to wave the flag of empathy than wallow in pity, and that’s much easier to salute. Unlike the more guarded world of his debut album Learning, here Hadreas opens his songs up for others with nurturing lyrics, adds doo-wop piano riffs, shoegaze guitar swells, and vocal melodies that favor flare over flaccidity, like the ones found on”Take Me Home”. Ostensibly, he’s singing coquettish words of submission to an apparent lover, but in Hadreas’ mind, “Take Me Home” is a song about “hookerism”. He sings one of the most indelible lines of the album, “I work the corner of an endless grid,” and it’s such a beautiful, sad, and surreal image, and at the same time, it’s just one part of the collage he creates.