The Magnetic Fields – Love at the Bottom of the Sea 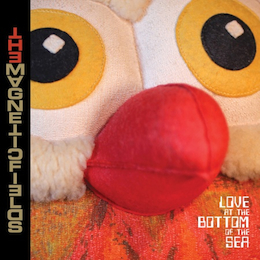 Thirteen years ago, The Magnetic Fields released their 69 Love Songs, a colossal three-disc collection exploring the vast complexities of love that was largely hailed as a synth-pop masterpiece. For any other band, such an ambitious undertaking can — and probably should — be dismissed as a gimmick, but due to the mercurial talents of band leader Stephin Merritt, The Magnetic Fields unquestionably pulled it off, and since then, fans have pined for another record as brilliant as 69 Long Songs. But is that too much to ask? Is there life after the landmark album, or are bands that find such universal critical success doomed to put out progressively less impressive records for the rest of their career, like waves flattening out as they get further and further from where the stone first fell?

The Magnetic Fields’ last three albums — a no-synth trilogy comprised of i (2004), Distortion (2008), and Realism (2010) on Nonesuch—might suggest that The Magnetic Fields were sliding down that slippery slope, sacrificing consistency for conceptual unity. But with The Magnetic Field’s tenth studio album, it seems that Merritt and co. are back on the right track again. While Love at the Bottom of the Sea isn’t another perfect pop album, it’s a hell of a lot closer than any of their last few releases.

As his musical career enters its third decade, Merritt is revisiting what’s worked in the past, starting with a return to Merge, the label that launched The Magnetic Fields into synth-pop stardom in the late ’90s. After spending nearly a decade moving away from programmed beats and embracing acoustic instrumentation, the synths are back with a vengeance for Love at the Bottom of the Sea. Merritt whips out his magical Dewanatron once again—along with other electronic oddities that chirp and warble, culled from his staggering collection of synths and drum machines over 30 years in the making—mixing the electronic with the acoustic in a way unseen since the band’s early Merge releases The Charm of the Highway Strip (1994) and Get Lost (1995).

In a lot of ways, not much has changed in Merritt’s universe. We’ve got his usual collaborators here — Claudia Gonson, Sam Davol, John Woo, Shirley Simms, Johny Blood and Daniel Handler (aka Lemony Snicket!) — as well as his signature amusing and quirky song titles, like “All She Cares About Is Mariachi”, “Infatuation (With Your Gyration)”, and “I’ve Run Away to Join the Fairies”. Merritt’s morose, baritone deadpan continues to drive witty songs about romantic longing and lust-filled desperation, with Gonson and Simms contributing vocals throughout for texture and irony.

After those 69, you’d think Merritt would be running dry on clever love songs. But now we’ve got 15 new ones, starting with the cult of chastity satire “God Wants Us To Wait” (“Although it would be the perfect end to our date/I love you baby but God wants us to wait”). Lead single “Andrew in Drag” is an incredibly honest and poignant exploration of sexuality and attraction (“A pity she does not exist/A shame he’s not a fag/The only girl I ever loved was Andrew in drag”). “Machine In Your Hand” serves as a reminder of why Merritt is the most innovative songwriter in pop music today; who else has the guts and the skill to effectively project the timeless theme of unrequited love onto an iPhone (“I don’t know why I love you/You’re not really a person/More a gadget with meat stuck to it”)? Not all of these tracks are quite so razor-sharp, though; “Born For Love” is a jumbled, splotchy mess that sounds like it was recorded underwater and “Only Boy in Town” is plodding and forgettable.

Love at the Bottom of the Sea isn’t the Magnetic Fields’ best album, but it doesn’t need to be—they’ve already ensured their spot in the indie pop pantheon with 69 Love Songs. It is, however, another collection of charming, infectious pop songs — a solid addition to the band’s expansive catalog, and maybe that’s the best we can hope for.

Essential Tracks: “God Wants Us to Wait”, “Andrew in Drag”, and “Machine In Your Hand”