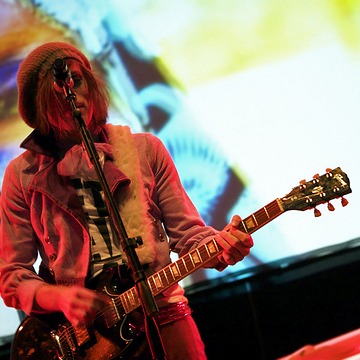 Today, of Montreal releases its latest collection of pop cacophony, Paralytic Stalks. This time around, musical brewmeister Kevin Barnes mixes things up, intermingling the influences of 20th century classical composers like Partch and Ligeti, experimenting with through-composition, and using session players for the first time. Paralytic Stalks also marks the first time in quite awhile that Barnes has written or recorded without the use of an alternate persona or character. Consequence of Sound‘s Research Editor Len Comaratta caught up with Barnes while he was at home in Athens, GA as he and the group finalized preparations for their upcoming tour.

We can just jump right into it if you want. I assume youre down in Athens right now.

The tour begins in two weeks?

Well, were starting our first show is in Athens on the 17th, I think, of February, but then we have a couple of weeks before the tour kicks off for real.

Okay, so youre just doing a hometown show to kind of kick things off, see how it goes?

Yeah, kind of well, the record will have already been out. Were attempting some stuff that weve never tried before visually, so its good to get one run through.

Visually, do you mean like the theatrics that you have or like in a new light show?

So are you going to have warnings regarding seizures?

With the sound of this album, you have all these strings. Are you going to have the string players on tour with you, or are you going to do that via different methods?

Its going to be a combination cause we do have the guy who actually played all the parts on the record, Kishi Bashi; hes in the band, too. So hes going to be playing parts, but theyre so densely orchestrated you cant really pull that off just as one person, so there will be some things in the backing tracks, or some things will be played by other instruments. Yeah, thats kind of a challenge that weve been working with right now. Weve been in rehearsals for two weeks now just trying to figure out a way to reproduce those arrangements live. Its been a real challenge, but I think its going to sound really cool. Im excited.

A lot of people may have felt that you changed directions on the last few albums, but Ive always kind of felt like you have this direction youre going in, and the albums are the albums as they are; youre not going back or forward or anything like that. Its just this new a new album. I dont know what people were worried about with this one.

[chuckles] Yeah, I dont know. Im definitely incorporating some elements that maybe I havent in the past. But as far as the songs being structured in this way, its definitely something I have done with records like The Gay Parade and Coquelicot [Asleep in the Poppies: A Variety of Whimsical Verse] and Skeletal Lamping, as far as having songs that contain different movements within one song, so its not just like an obvious pop arrangement. Thats definitely something that Ive been interested in for a while just because when youre writing songs, when youre writing pop songs, theres a tendency to follow the template that other people have already established as far as having verses repeating and choruses repeating and all that stuff. Its not very challenging. Once youve written the verse and the chorus, then the songs almost done. So, theres not that much you can say beyond that. I like the approach of writing a section of music and then using that as inspiration for the next section and then using that as inspiration for the next section but not really worrying so much about having things come back, not worrying so much about repeating sections.

And that was your experimentation with the through-compositions?

Yeah. Thats something that appeals to me just because I find it more challenging and more exciting and more fulfilling. I have worked with the typical pop template a lot just because sometimes Ill try to chase that idea trying to write the perfect pop song. But with this new record, Ive been more interested in extending the songs and having it be more transportive, more a journey of sorts.

False Priest marked you returning to organic instruments. And Paralytic Stalks takes it even further now with the inclusion of session players. Why did you decide to bring in session players, especially considering that youve been pretty much a one-man band in the studio for the better part of this decade? And how come you never bring in the live touring band to record the albums?

Well, I guess what it really comes down to is that the people that I got to play on the record play instruments that I cant play, whereas the touring band has had fairly common instrumentation as far as keyboards and basses and guitars and drums and things that I can play. I like to do the bulk of the work myself. So when it comes to something when I hear something that I just cant produce on my own or I cant realize on my own, then Ill bring in other people. Getting Kishi Bashi involved and getting Zac Colwell involved was great because they were able to contribute something that I could have never contributed on my own, and they were able to help steer the songs into a direction that I wouldnt have come up with on my own. Theyre in the band now, so I guess it is like having band members involved.

With that in mind, were those parts strictly written out, or did you leave room for the players to move within the framework? For example, Wintered Debts sounds a bit more structured than the avant nature of Exorcismic Breeding Knife.

Yeah, those, Wintered Debts, Ye, Renew the Plaintiff, and Authentic Pyrrhic Remission, those three have extended instrumental sections that were definitely more collaborative in nature as far as I maybe have a concept, I want it to be this length of time, and I want to have this sort of vibe, and then I would send it to K, or I would send it to Zac. K is Kishi Bashi. So, Id send it to them to see what they heard or what they could contribute. Then theyd send me their parts, and then I would use that to help create a structure, and then I would add my own parts to that and affect the things that they sent me. It was definitely a lot of back-and-forth and collaboration for those moments.

So was that after youd written the song, or was that actually during the songwriting process?

It was within the songwriting process just because I had written the first couple sections and then got to the point where I knew I wanted to have a certain musical emotion or whatever. I wanted to have something in these sections that was different from the other sounds I had created. And then from there, like with Wintered Debts, for example. And then I wrote that tag at the end, the piano thing at the end. I mean, I could have just kept writing. The songs didnt ever really have to end. I could have made each one of them 30 minutes long or whatever. But I sort of, I guess, got to the point where I was at seven minutes or eight minutes or 13 minutes or whatever, and it could just be done. I could just work on something else now.

Wondering what Kevin Barnes has been listening to on Spotify? Click here and find out!

I noticed the last four songs on the album are almost 2/3 the album length. Youre not a stranger to having long songs. The Past Is a Grotesque Animal is over 12 minutes long. But its usually one song that stands out, whereas on this album, it seems to be all weighted towards the end there. When you were sequencing the album, were you conscious of all that? Was there a method to your madness?

No. And actually most of the songs are sort of alphabetical as far as their working titles went, the sequence of them for the most part. I changed all the titles after the fact, but the working titles pretty much placed them in that order, in that sequence. So it was almost alphabetical. I did experiment a little bit. Initially, I was going to put Exorcismic Breeding Knife as the opening track, and then I thought better of it because I thought maybe it would alienate some people and they wouldnt really get to that point. Theyd just listen to that one song and throw the CD in the trash.

Thats not much faith in your own work is it?

No, but I understand how people are. I understand that certain people, some people arent interested in that they dont really look to music to provide that kind of stimulation or whatever it is. So, I can appreciate that theres some people like that its not for everybody obviously, and I dont really want to antagonize people. I just want my art to communicate with people, and hopefully it does.