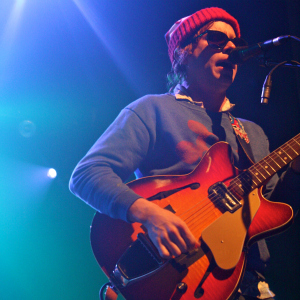 Fresh off the release of their sixth record, this year’s Be The Void, Dr. Dog performed a sold-out show Saturday at The Regency Ballroom in San Francisco. A notable CoS favorite, Dr. Dog drew from its extensive catalog in order to compose an ambitious 18-song set; and while their music felt more fitting for an outdoor festival setting, and at times the vocals seemed stagnant, Dr. Dog ultimately redeemed themselves with their imaginative instrumental solos that posed tribute to the classic rock of the past.

Beginning their set with “That Old Black Hole” and “Stranger”, I was initially unconvinced. But then the band launched into “The Breeze”, and the entire crowd began singing word for shining word. It was then clear that while this show was about the band, it was actually the crowd’s devotion that made the show memorable. This is an obvious statement, I acknowledge — but I haven’t seen such a passionate loyalty and reverence for a band since Robert Plant and the Band of Joy’s performance at the 2011 Hardly Strictly Bluegrass Festival. “The Ark” was another throwback to Dr. Dog’s 2008 album, the aptly named Fate; again, I wasn’t enthralled in the beginning, but as soon as guitarist Scott McMicken launched into what can only be described as a solo of legendary rigor, I found myself smitten with this band and their curious surprises.

Likewise, bass player Toby Leaman came out of his shell during “Do The Trick”, revealing himself as the true singing spirit of Saturday night’s show, especially given McMicken’s seemingly overwrought and strained voice. The band members had a habit of singing much too loud for the setting, perhaps not realizing that the microphone, speakers, and the Regency’s echo were carrying their songs much farther than an outdoor venue. Be the Void‘s “Lonesome” was definitely meant to electrify the outside air and be sung aloud by hundreds of more people.

The instrumentals continued to define the performance, with the lyrics taking backseat; “Vampire” was a beautifully woven story, an effective example of being expressive with instruments rather than word. Even the band’s stage setup was symbolic and theatrical, decorated like they were performing in their living room. There was a pot of flowers, Grandma’s embroidered blankets thrown over speakers, and the band members themselves performing on ethnic rugs. Perhaps that’s their way of bringing Home along with them on tour; it was a testament to the “little things”, and it only enunciated the sense of familial companionship felt by this well-performed and artfully conceived group of performers.

Setlist:
That Old Black Hole
Stranger
The Breeze
The Ark
Do The Trick
Lonesome
Mirror, Mirror
Vampire
My Friend
Someday
I Only Wear Blue
Hang On
Heavy Light
These Days
The Rabbit, The Bat and The Reindeer
The Beach
Shame, Shame