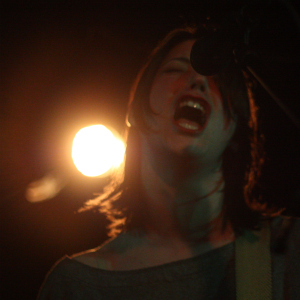 The beast of hype is a nasty one. It takes wholesome innocents like Sharon Van Etten and aligns them with a world of unfair, ill-informed assumptions, too-cool-for-school bio photos, and overwrought press releases. Prepared or not, this past week, Sharon Van Etten was well acquainted with the publicity machine. But Saturday night’s sold out show at the Black Cat was a strong reminder that this young songwriter can never be stripped of her charm, passion, or eagerness, not even by such a vicious beast as hype. For better or worse, it also showed she ain’t perfect.

The evening began with a rousing set from Austin, TX quintet Shearwater. Once an Okkervil River side-project featuring Okkervil River’s Will Sheff and Jonathan Meiburg, the band has since evolved into a showcase for Meiburg’s Scott Walker-indebted, brooding baroque-rock, with Sheff and Meiburg parting ways to focus on their respective outfits.

In support of their tremendous forthcoming LP, Animal Joy–a rollicking ode to primal instinct– the band glided through a set of mostly new material. The new tunes are notably jauntier than the gloomy, post-rock we’ve come to know from them, the band opting for more straightforward pop song structures, upbeat rhythms, and less of this. As a fan mostly familiar with (and excited by) their doom and gloom material, the set felt a little less vital than I may have hoped for, with the chaos much more contained than usual. But nonetheless, Meiburg’s impassioned, operatic howl was morosely intact as was the rest of the group’s precise musicianship.

Shortly thereafter, the ever-adorable Van Etten (I don’t mean to patronize, but there’s just no other way to describe her) and her three-piece backing band emerged. But, unfortunately, SVE and co. didn’t immediately amaze. The group began with “Warsaw”, the first cut off of the less-than-a-week-old Tramp. But something was off. Van Etten’s overdriven strums seemed slightly out of time with the rhythm section. You could see the bewilderment on her face. Maybe it was the early tour date jitters, or she simply was off her game, but it wasn’t a captivating way to open things up. Luckily, it was the only blatant misstep of the night.

From there on out, it was smooth sailing.  Van Etten quickly won the crowd back over with the opening chords to “Serpents”. It wasn’t as ferocious as she showed it could be on Jimmy Fallon the other week, but then again, Aaron Dessner wasn’t on the Black Cat’s stage, either. Can’t really get better than that.

Focusing mostly on new material, SVE’s syrupy pipes filled the room just like you’d expect them to. Her impeccable, folk-spun melodies were executed with precision and passion. The thing that’s so incredible about Van Etten, is how she’s able to meld harsh and gentle together so seamlessly. At its core, her music is angry, but a gentle approach to that anger yields undeniably gorgeous results. Her lyrics are bitterly heartbreaking, her strums occasionally crass, her energy genuinely raw and powerful. But there’s a sort of delicate beauty to it all.

A song like the distortion-filled “All I Can”–which was played to complete and utter perfection–is a great example. It’s dark, brooding, painful, even desperate, but, like the greatest of songs, it begs you to live in it without immediately scaring you off like typically angry music does. Saturday night, its swirling tones and soft strums grew into an energy you never would have foreseen at the song’s soft-spoken start.

Most importantly though, the set was filled with all of the heartwarming cute-isms of any other SVE show: She talked to the front row on a personal level in between nearly every song. She made sure to comment on absurd goings-ons, like an obnoxious, crazy woman dancing like she was at a rave instead of a folk-rock show (“Isn’t that why you all came tonight? That was amazing!”) and call out a photographer who broke a pint glass right at my feet without even apologizing  (“I think you just broke a glass, dude. Is there blood on the floor?”). She shared an old song and B-side as if we were her close friends (“Life of His Own”). She openly drank JÃ¤germeister from a metallic flask, smiled at the grateful crowd, and made us feel welcome in her presence.

And though it may not have been the best SVE show I’ve ever seen, lacking some of the others’ haunting, entrancing qualities, she did prove that, against a ton of odds, she’ll never sacrifice her eccentric charisma to the machine of hype. In adorably bad-ass fashion, she’ll gently rage against it.

Set List:
Warsaw
Serpents
Give Out
Peace Signs
Kevin’s
Ask
Life of His Own
Magic Chords
Leonard
In Line
All I Can
I’m Wrong
Encore:
Love More