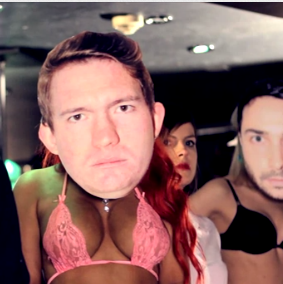 Rock and roll and strippers have always gone hand-in-hand, like peanut butter and jelly or scurvy and pirates. Welsh indie-pop outfit Los Campesinos! seek their own unique brand of fun with these hard-working ladies in the music video for “Songs About Your Girlfriend”. In the David Spearing-directed clip, the band takes on two roles: as themselves performing in a strip club and as the strippers, represented by real girls wearing giant masks of the band members’ faces (think Big Head Mode from N64’s Goldeneye). As they dance and twirl around, the enormous, lifeless faces make the act of strip clubbing all that more depressing. Watch the video below (via Pitchfork).

The band’s latest LP, Hello Sadness, is out now via Wichita. “Songs About Your Girlfriend” will be released as a single on March 19th.