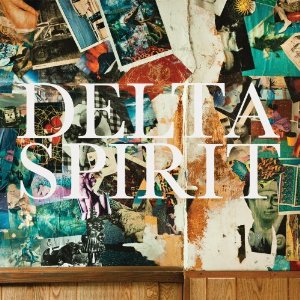 Nearly a year ago, Delta Spirit told Rolling Stone that they were sick of being pigeonholed in the Americana genre. For the Long Beach, CA rockers’ at the time untitled third album, they planned on incorporating their “love of hip-hop, the ‘90s, progressive production,” finding slow jams “closer to Montell Jordan than Neil Young,” according to multi-instrumentalist Kelly Winrich. His off-the-cuff remark belies how seriously the band takes itself on Delta Spirit. Their new sound augments, with some exceptions, the boisterous twang Delta Spirit established on and has been steadily expanding upon since I Think I’ve Found It in 2006. (Incidentally, the band released its first EP for free when they announced they found the sound they had been looking for on Delta Spirit, further driving home the point.)

Whenever a band departs from their established sound, it can raise questions not only about authenticity but also about quality. Kings of Leon, for example, were criticized for abruptly abandoning scrappy, countrified punk for more accessible (some read: bland) arena rock even though they hinted at it before, mostly because Caleb Followill admitted that he coveted more fame and fortune. The same might even be said of Delta Spirit: “Bushwick Blues”’ emotive chords would have stuck out like a sore thumb on their alt-country debut, Ode to Sunshine, but it exemplifies the developing “broader sonic palette” that appears in full on Delta Spirit.

It’s hard to argue this new sound isn’t credible against lead vocalist Matt Vasquez’ gut-busting delivery in general, especially when he sings, “It’s in my head, it’s a relief, the sweet sound that I don’t want to leave” on “Otherside”. In this case, “the sweet sound” is the aforementioned progressive rock leanings, meandering triads that also open the more delicate preceding track, “Home”. Vasquez’ admission coupled with introspective prog-rock arrangements—intentionally or otherwise—reveal his concerns about the band’s new sonic direction. Like all moments of vulnerability, it’s buffered between “Idaho”’s verses about getting wasted and “Tellin’ the Mind”’s rollicking war yips, disclaimers which reassure listeners that the old Delta Spirit is still there. In fact, “Money Saves”’ rhythm and chord progression is almost identical to “Bushwick Blues”, a formula just as good the second time around.

It’s just as easy to recognize external influences on the rest of Delta Spirit. Opener “Empty House” fades in with articulated circularity not unlike recent tour mate My Morning Jacket’s “One Big Holiday”. The subtle panning halfway through the song introduces the album’s diverse yet understated production value, including synthesizers instead of “Trashcan”’s apocryphal namesake. It comes to head on closer “Yamaha”, which unfolds with lush, ambient buzz as Vasquez ends the album by unveiling his most existential lyrics yet: “There’s a thousand things I will not understand, there are certain things in life you cannot change”. This wider worldview has its moments, like the wistful sleigh bells on “Into the Darkness”, that strive to endear like the birdsong on History From Below’s “Scarecrow” but instead come off as contrived and somewhat schmaltz-y. The majority of “Time Bomb” nearly succumbs to the same fate, weighted down by bombastic drums and piano riffs seemingly straight out of High Violet.

In spite of these growing pains, Delta Spirit’s breadth still demonstrates a natural quantum leap from their earlier work, and the band itself is stronger for it. They’ve taken a risk by forever associating themselves with a self-titled album that departs in any capacity from their earlier releases, but it’s paid off in more sophisticated songcraft. Doubtless they’ll still lose fans, especially by insinuating that their earlier defining roots-rock didn’t reflect how they wanted to sound. But as Vasquez sings on “Empty House”, “Some folks don’t like charity,” and if the members of Delta Spirit are selfish making an album for themselves, so be it.