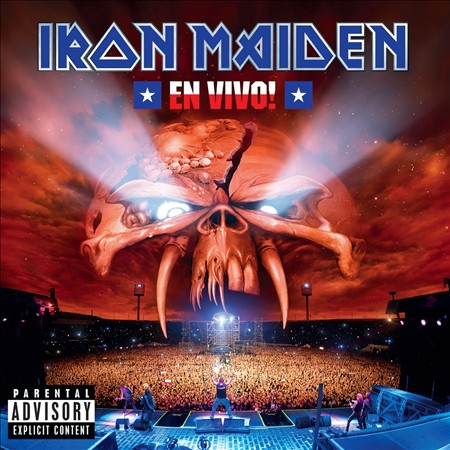 After years of listening to and enjoying the metal gods known collectively as Iron Maiden, I have come to this conclusion: Iron Maiden will stop releasing live albums the moment fans tire of lead singer Bruce Dickinson shouting out demands akin to “Scream for me, Chile!” Therefore, Iron Maiden will never stop releasing live albums. These releases aren’t classics, but they are a helluva good time.

And why shouldn’t they be? What sets Maiden apart from most bands who constantly release live records is that they are usually promoting a new album. The tracklisting isn’t static and solely consisting of greatest hits, as it often is on live efforts from other artists. The band’s most recent live document, En Vivo!, offers up the Maiden of old and new in welcome portions. It isn’t shocking that fans enjoy choice cuts from The Final Frontier (the album they were touring behind for this release); what’s shocking is that they seem to enjoy them just as much as their classics.

It’s a testament to the ol’ warhorse himself, ringleader/bassist Steve Harris, and his undying energy that stretches across the stage to his other bandmates, as well as the thousands of concertgoers. Hark the herald demons sing along to “The Number of the Beast” by the thousands for the 1,000th time, yet clap and shout just as excitedly to “When the Wild Wind Blows” for maybe only the 10th time. Dickinson’s voice (which is still in incredible shape) often beckons the crowd to scream, but with the continued three-guitar attack of Adrian Smith/Dave Murray/Janick Gers, he’ll never really need to.

Casual fans will enjoy the bevy of hits included (see: the most rawking song ever in the form of “The Trooper”, whose botched verse is not re-cut in the studio), but the band’s confidence in recent material is apparent; five of the first six tracks are from The Final Frontier. That’s right, Maiden. Front load that set with proof you’re still relevant in the metal world!

En Vivo! is proof positive that six men in their 50s can still rock with the best of them. So, of course, up the irons!

Essential Tracks: “The Final Frontier”, “Two Minutes to Midnight”, and “The Trooper”