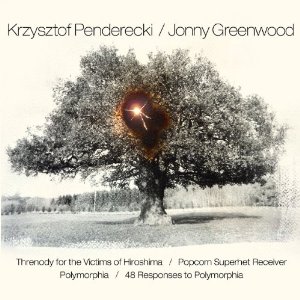 Creation and destruction have been paradigms in art since Neolithic sculptures started crumbling under the ravages of war. The rapidly growing landscape that contemporary avant-garde music finds itself in provides the inevitable collision of these very concepts found in Krzysztof Penderecki‘s and Jonny Greenwood‘s work. The result is one of the most ambitious albums of the year so far.

Penderecki–the musical pride of Poland–and his tremendous oeuvre of beautifully devastating concertos and requiems are rarely paralleled but often overlooked by young music fans, yet anyone familiar with the films The Exorcist, Inland Empire, and Children of Men have already heard Penderecki’s unsettling strings at work; perhaps his pieces felt most at home when Stanley Kubrick used several whole compositions of his in The Shining and 2001: A Space Odyssey.

Greenwood, the gangly guitarist in a small band from Oxfordshire, has joined the ranks of other rock stars like Trent Reznor who have become accomplished, innovative film composers. While his sullen, jazzy pieces in the abstract documentary Bodysong would’ve fit nicely on Radiohead’s Hail to the Thief, Greenwood’s unique prowess as an English composer has taken shape at an incredible pace, allowing him opportunities to mold critically acclaimed soundtracks for recent films We Need to Talk About Kevin, Norwegian Wood, and Paul Thomas Anderson’s There Will Be Blood.

These two masterminds of tone clusters and harmonic discordance have been dancing around each other’s work for years. Aside from both their stark pieces being weaponized by similar directors, Greenwood’s own rabid fascination with Penderecki’s work is what allows this treasure of an album to exist in the first place; his self-admitted fanboy-ism has resulted in crucial meet-ups and inspired compositions, as well as a momentous joint concert in Wroclaw last year (where much of the material re-recorded for this album was performed).

Greenwood’s modern, literal responses to Penderecki’s work from decades ago fit exquisitely next to the old master’s pieces. Penderecki’s sonic wrecking ball “Threnody for the Victims of Hiroshima” pushes through several bouts of calms and tumults, with violas and cellos raging, becoming a sinister push-pull of notes before exploding into a supernova of musical warfare and fizzling out. Greenwood’s “Popcorn Superhet Receiver”, performed here by the AUSKO Chamber Orchestra with more nuanced gusto than the famed 2005 BBC performance of the piece, is his optimistic answer to “Threnody”. Greenwood builds with the pieces left shattered by his idol, and, just as the aforementioned piece may now symbolize the harrowing results of nuclear conflict, “Popcorn”, now immortalized by images of Daniel Day-Lewis sneering, evokes both primordial beginnings and splendid growth, and Greenwood here fully blooms, owning the fact that he’s the man who sought to sabotage “Creep” with fits of dead guitar chugs before the song’s refrain.

“Popcorn” is broken up into parts, traveling through an earthy dance of hoedown grooves and staccato plucking, recalling the same primitive rhythms and swirling tension that Stravinsky premiered in 1913 for “The Rite of Spring”. The final part features a weathered return to earlier themes, culminating in a majestic 7th-note swell that acts as a hopeful response to the carnage previously left by Greenwood’s hero.

“Polymorphia” signals the return of Penderecki, as he piles up layers of ominous strings for three minutes straight, transforming quaint-looking, centuries-old instruments into clamoring dogs and humans alike. Adding to the recursive, technology-revering nature of this album, the piece, composed in the 60s, is actually based on psychiatric patients’ brainwave responses to his own “Threnody”. It descends into a lethargically menacing undercurrent of clawing notes and low vibrations and climaxes in frightening tides of vicious tones followed by a C-major blast so refreshing that it’s the most insidious and outrageous moment on the record. (Strangely, “Polymorphia” mirrors The Beatles’ noise-bubble finale of Sgt. Pepper’s, though the Liverpool quartet wrote “A Day in the Life” several years after the piece.)

While Greenwood seems poised to continue successfully writing his own scores alongside polarizing Radiohead albums, his collaboration with his living inspiration stands as a testament to his own compositional dexterity, Penderecki’s legacy, and the pairing of old and new, chaos and creation.